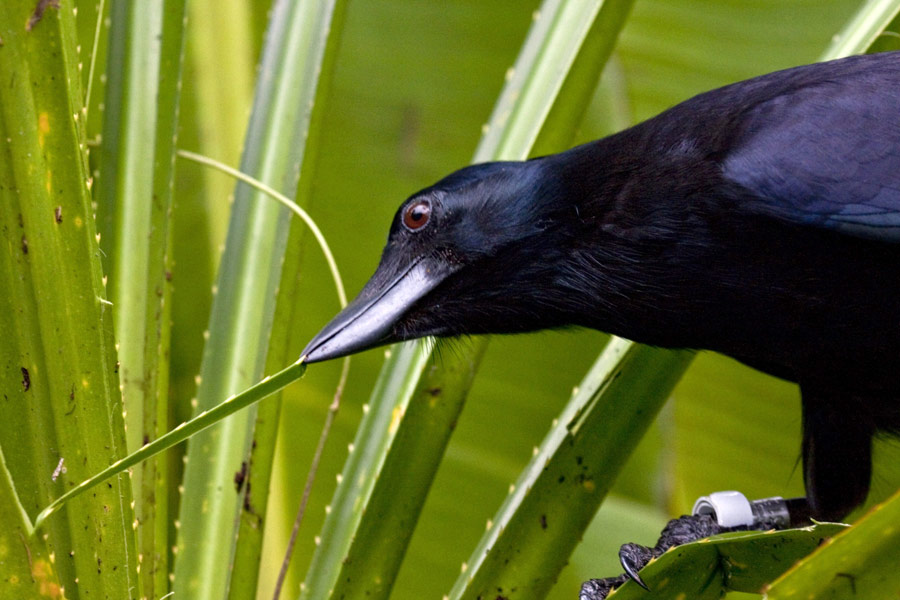 There seem to be two species that can build and use tools: humans – obviously – and clever wild crows. Even though researchers long knew they technologically advanced, the black birds were never caught on camera using tools in their natural environment.

That is, until now, when new footage revealed New Caledonian crows crafting hook-shaped tools and using them for foraging. Thanks to a tail-mounted “crow cam,” ecologists were able to catch the wild bird in the act, something that has proved to be rather difficult to do in the wild.

A rare insight into the lives of the New Caledonian crows was given to the observing scientists with the help of tiny cameras that peer beneath the birds’ bellies and create remarkable, uninhibited footage.

In addition to catching a glimpse of two crows making impressive foraging hooks, the cams also captured hundreds of hours of their activity over time. In spite of the many things researchers were able to learn about this particular species, there is one thing that remains a mystery.

Ecologists are still trying to figure out what drives these birds to use tools instead of their beaks. According to leading author Christian Rutz, from the University of St Andrews, UK, this is the question that needs answering: “Why is it that New Caledonian crows use tools but other corvids don’t?”

Surprisingly little tool activity was caught in the nearly 12 hours of “crow cam” footage. Presented in the journal Biology Letters, the behavior of 10 different birds was analyzed, but only 3 percent of the entire footage contained activities such as making or using tools.

Instead, the crows clearly preferred foraging with their beaks – and even when one of the four birds did use a twig, the decision often seemed random. They would be seen using their sturdy beaks to dig in the trees’ bark for minutes on end, and then they would suddenly switch into tool use.

The team was especially excited about two high-five-worthy moments caught on camera. After going through hours of shaky footage, the researchers found two different crows making – and using – hooks as tools. Until now, this activity was only observed in captivity – cages or baited feeding sites.

This was a gold moment for the team not only because of the challenging terrain of the New Caledonian crows’ tropical habitats, but also because they are notoriously difficult to observe due to increased sensitivity to disturbance.
Image Source: PBS