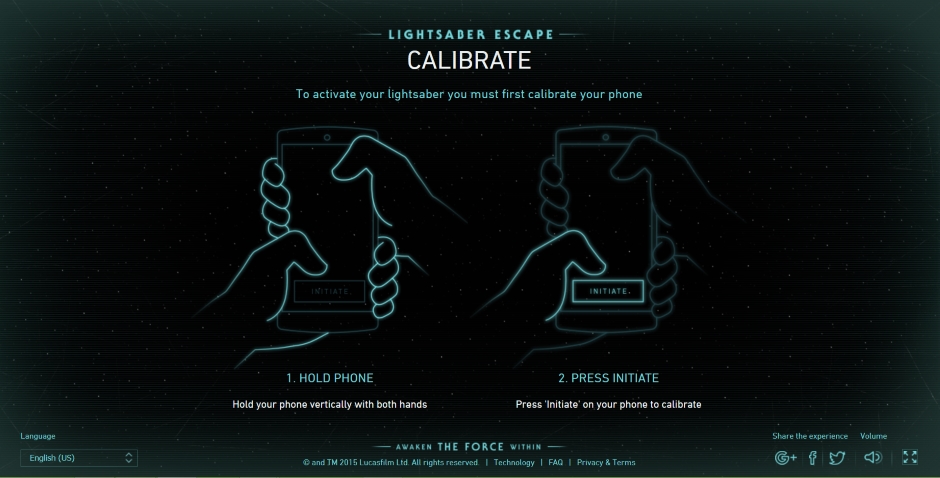 One might say our planet was invaded by companies pushing “Star Wars: The Force Awakens,” considering the sheer amount of merchandise and commercials that have flooded our shelves and street banners.

It’s got so bad that non-fans of the franchise have started rolling their eyes, wishing the hype would just die down already. But given Disney’s partnership with virtually every brand known to man to promote the film, this is not happening any time soon.

One of the partners that revealed their trick today – the morning after the latest Star Wars premiered in Los Angeles – is Google, and their deal is pretty awesome. Its Chrome browser has become the home to a new and “immersive” experience offered by Disney, LucasFilm and Industrial Light & Magic.

All you need to access the Chrome game called “Lightsaber Escape” is a smartphone to act as the weapon and a desktop with Chrome downloaded. The partners promise to bring the movie to life through the web, but you have tickets to the premiere on the 18th, hold on to those. Nothing compares to that ultimate experience.

So without trying to ruin it for you, here’s the deal. Your phone turns into a lightsaber that you need to fight with. You’re in a Star Destroyer and you set out to battle the Stormtroopers that pop up on the computer screen.

Ready your phone and your browser and head to g.co/lightsaber on your desktop. A unique URL will appear on the website, one that you will have to tap into your phone’s version of Chrome. Calibrating the phone only takes a second, followed shortly by some training.

Keeping the computer’s sound on completes the experience of deflecting the Stormtrooper’s shots with your phonesaber. It’s rather neat. But only then does the battle really begin, as you prove you have what it takes by deflecting enough shots.

It’s surprising to see the 3D graphics rendering as fast as they do on the computer; according to Google, they were built with WebGL, and you needn’t worry about lag or latency. Google is definitely showing off its web specs with this awesome experience – you don’t even need any kind of plug-ins.

For those of you who are super into finding how Google created this, you can check its developer case study. But if you’re had just about enough of Star Wars, you can pass the link to a friend you know might be into it.
Image Source: Mondo