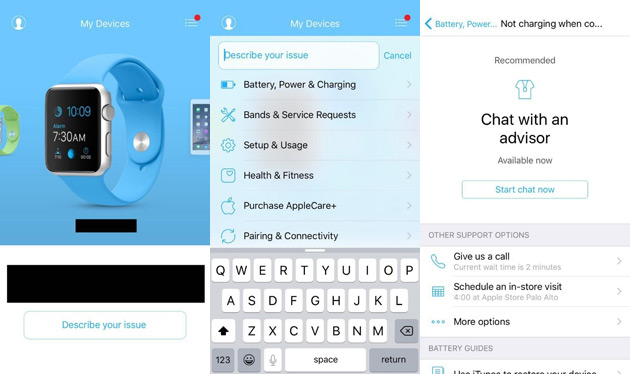 All of us Apple users know what a hassle it can be to take a trip to the Genius Bar. Even though its purpose is to save you time and provide prompt services, staying in line for a half an hour to get your iPhone fixed is no treat.

To be fair, most Genius Bar workers are good at what they do, so most of the times it’s not their fault for the slow lines of customers waiting for someone to fix their issues. However, how awesome would it be if you could skip the trip and the waiting altogether?

Recently leaked photos reveal a support app that replaces the Genius Bar trip, an app that Apple seems to be working on so iDevice owners can solve their problems without ever leaving their homes. Well, at least in most cases.

According to an Apple insider, the tech giant is looking for ways to cut short – or completely eliminate – the time iPhone and iPad customers spend waiting around at an Apple Genius Bar. The leaked photos show the new app can help fix problems by asking questions regarding the malfunctioning device.

Users can also choose to set up a Genius Bar appointment, a solution that can reduce the waiting time at the scene, as well. If you don’t want to go down to an Apple Store, you can access the service support available through a live chat feature.

If this time-saving app is eventually launched, it will be a significant improvement from the current Apple Store app, which doesn’t offer you any other options but setting up an appointment at the nearest Apple store. Given the fact that this is leaked information, there is no way for us to know when – or if – this app might be launched.

There’s also the possibility that this support software we know exists will become a part of the existing Apple Store app rather than materialize in a standalone app. However, in the meantime, there are several things you could do to make the trip to the Apple Genius Bar less painful.

For example, don’t head down to the Apple Store without an appointment, and back up your data in case your phone needs a factory reset. You can also try coming in without your tech savvy pal who keeps on outsmarting the employee, but most important of all: stay calm. The operators aren’t out to get you, so keep that in mind.
Image Source: SlashGear