You are here: Home / Health / A Girl In Oregon Has Been Infected With The Bubonic Plague 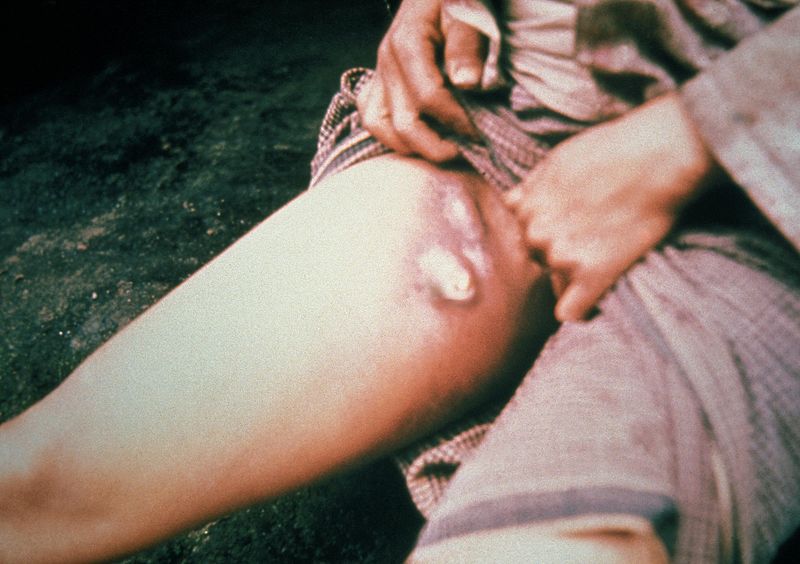 Swollen bubos characteristic to the plague

The middle of this week has brought startling news in the medical world, because a girl in Oregon has been infected with the bubonic plague, while she was on a trip.

The bubonic plague, otherwise and more poetically known as the Black Death, is caused by a bacteria called Yersinia pestis and it’s one of the three ways in which this bacteria can infect you, the other two being septicemic plague and pneumonic plague.

Bubonic plague has always been spread between humans and animals by fleas, but one could also get it if he or she has been exposed to the fluids of a dead body infected with the plague. It develops, at first as a flu, with characteristic symptoms: headache, nausea and fever. But soon afterwards, swollen and painful lymph nodes called bubos will appear in those parts of the body where the bacteria penetrated the skin. Sometimes, the bubos can burst open.

The teenage girl from Crook County, Oregon, went on a hunting trip close to Heppner, in Morrow County, where she is believed to have been bitten by a flea. This is supposed to have happened on October 16th and the girl started feeling sick after 5 days of incubation of the bacteria. After three more days, she was hospitalized and taken to intensive care. Latest news report that she is now feeling better and has been moved out of the intensive care unit. Also, no other cases have been reported so far.

The bubonic plague is curable with antibiotics, if the patient presents himself to a hospital in the early stages. Left untreated, though, it is fatal. No deaths of the bubonic plague have ever been recorded in the United States. However, in 2012 a man from Oregon did lose all his fingers and all his toes to the plague. He contracted it while trying to pull out a dead mouse from his cat’s throat. Talk about a series of unfortunate events…

Contrary to popular belief, the disease does not come from fleas, but is rather carried by them. It comes from  rodents, such as rats, chipmunks, squirrels and other such wild creatures. The fleas that bite them can also bite domestic animals and / or humans and this is how it’s transmitted.

The 14th century was the plague’s shining moment in history. It killed 40 million people in Europe, Asia and Africa. Because it killed so many people, the demand for workers was higher than ever, therefore wages grew. This is why historians believe the plague was the reason for Europe’s economic development.