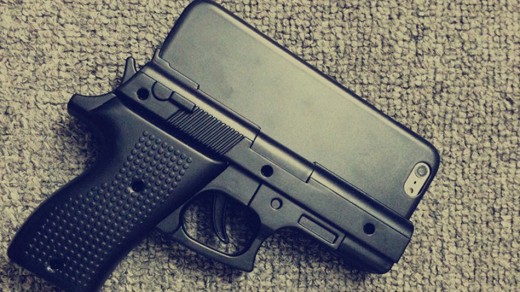 It isn’t particularly difficult to predict what a police officer would do when a teenager pulls out a gun from his/her pocket, especially in the light of recent tensions between police in community members.

In most of the cases, police officers would be entitled to do their job, but how are they to make a difference between a gun and an iPhone case? Yes, somebody designed an iPhone case that looks almost identical to a semi-automatic pistol when in your pocket, making the job of law enforcement that much harder.

Online vendor Wackydot.com is the one selling the case which has recently received the public’s attention under the description of “sexy pistol protective shell for iPhone 6.”

Due to their high resemblance to a real gun, critics have requested that the case be pulled out from the virtual shelves, as law enforcement might mistake them for the real deal and potentially cause deadly encounters.

Police officers who were made aware of the iPhone case are admittedly unhappy about their existence. Their concerns were supported by retired firearms instructor Al Della Fave, a state trooper from New Jersey. He explained that reaching for a phone in your back pocket – where teenagers usually keep it – might easily be taken for a gesture of reaching for a gun.

Besides the potential danger of confrontation with police officers, people carrying their iPhones in gun-shaped cases are also exposing themselves to being mistakenly accused of violating open-carry laws.

There are currently 6 states that have strict rules against carrying a weapon in public, with 13 others requiring a license to carry or a special permit. Police officers and precincts have turned to the social media in their attempts of warning the public about these dangerous cases.

Several took it on Twitter and Facebook explaining how jobs in law enforcement are hard enough without having to make split-second decisions on whether that’s a gun or a phone that someone is pulling out of their back pocket.

Basically, if you’re looking for a unique iPhone cases, skip the gun-shaped one; there are plenty of other options out there. The handmade ones offered on Etsy.com shaped like Etch-a-Sketch or crayon boxes might not be as “cool,” but they will surely not get you shot.
Image Source: SourceFed