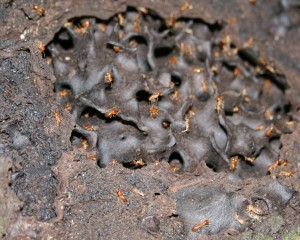 A recent study suggests that termites are of great help when it comes to stopping deserts from spreading into semi-arid ecosystems: termites’ role in preventing desertification involves buffering grasslands from arid land and aerating the soil in order to improve its fertility and make it more useful to man, animals and insects.

One of the most important contribution that termites and their ceaseless activity have is shown in the percentage of arid or semi-arid savannas existent on our planet: 40% of the Earth’s land is a savanna and it supports 38% of the world’s population.

Robert Pringle, an ecologist from Princeton University in New Jersey believes that the effort that the termites are doing is visibly helping and improving the life of all living creatures on land. The modifications that they bring to the soil bring a lot of prosperity to the atmosphere and all creatures whatsoever.

“If you pulled out the termites from the system, you’d get a dramatic decrease in its ability to support large populations of charismatic wildlife.”

Furthermore, with the help of termites, the arid clime between the Sahara Desert and the Sudanian Savanna hasn’t touched or influenced the Great Green Wall that has about 4.400 miles across, located in Africa. The tunnels that they created have kept the soil moist and the nutrients were able to penetrate well thanks to the small channels and holes created by the mini-engineers. Moreover, the recovery from periods of hard drought has been easier because of the tedious work of the small insects.

Termites are a group of eusocial insects that are commonly known, especially in Australia, as “White ants”, but they are not at all related to ants, like everybody thinks. The labor is divided among castes, providing with new generation larva and taking care of the collectivity together. The colonies in which they live in are, at maturity, formed by several millions of individuals that make them the most sociable insects that exist.

The main places where these beautiful and unstoppable creatures live their lives are Africa, South America and Australia. Savannas and plains located in these preferential places are safe with the help of termites, and as a consequence, the climate here won’t be able to destroy the lands. The vegetation above the ground is safe from droughts by the underground continuous movement.

Co-author Cornia Tarnita explained in a statement that:

“Even when you get to harsh conditions where vegetation disappears from the mounds, re-vegetation is still easier. As long as the mounds are there the ecosystem has a better chance to recover.”