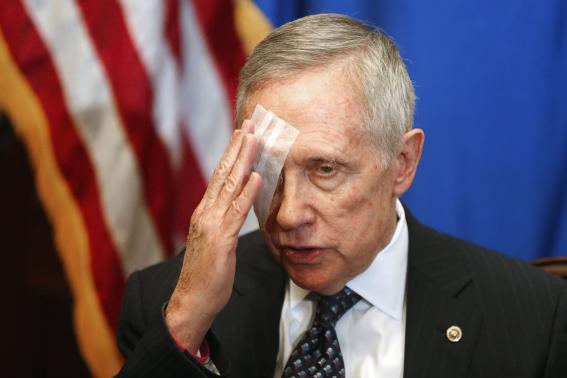 Bruised yet unrelenting, Senator Reid returns to the Senate floor on Monday to continue his difficult mission as the Senate Minority leader. Despite his workout accident and the surgery that followed his injury (the senator had to have his facial bones repaired), Sen. Reid is back on track and says he’s feeling great.

As he was entering the Capitol, he informed reporters that his bruises aren’t enough to keep him away from his work and that he is glad to be back. The 75-year-old senator also expressed his deep appreciation for the kindness and patience of his colleagues during his recovery time.

“Senator McConnell and his lovely wife, Elaine, have been really good to Landra and I over the years and we appreciate his words of support,”

The senator’s injury occurred on Ney Year’s Day as he was exercising in his new home. A piece of the equipment he had been using at the time broke off and sent the senator smashing into cabinets. Apart from the eye injury, Sen. Reid also broke a couple of ribs.

Even during his convalescence, Sen. Reid was on top of what had been going on in the Senate. Immediately after the senator underwent surgery last Monday, his spokesman announced that Reid would not only recuperate from his residence but that he would also continue to be involved in what was going on in the Senate through telephone conferences or meetings with fellow senators. One particular event upset the senator: the Keystone XL pipeline bill was approved last week.

‘I’m sorry to say that we spent a month on a bill calling for the importation of oil from a foreign country and then importing that oil outside America,’

Upon his return, there are already pressing matters in need of the senator’s attention. For one, the GOP-backed bill involving funding for the Department of Homeland Security. If it were to pass, the bill would provide the Department of Homeland Security with $40 billion in funding. Both Reid and other Democrats have strongly opposed this piece of legislation, especially since it links homeland security funding to immigration issues.

Reid was particularly critical of the bill, insisting that lawmakers should not be dealing with matters that are completely unconnected to homeland security. If a bill were to pass, it should only address homeland security and have no additional strings attached.

On Tuesday, the bill will face a vote with significant implications for all those involved.