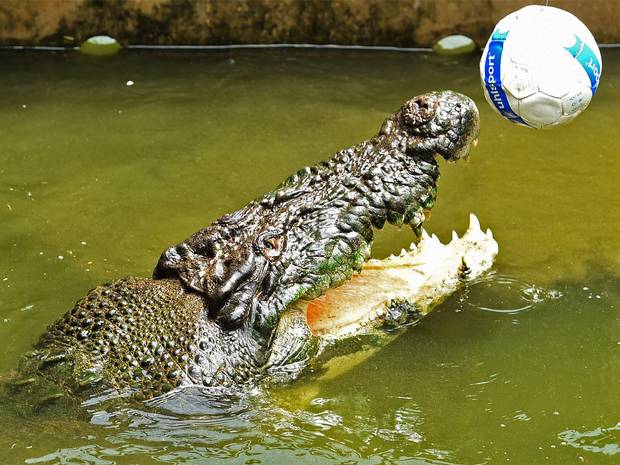 The crocodile is one of the most ferocious and feared creatures in the animal kingdom. Its pre-historic frightening looks and threatening behavior earned it a reputation of dangerous predator.

But according to a new study, crocodiles can be fun creatures too. They enjoy playing and having a good time, in between meals, of course.

Vladimir Dinets, a researcher at the University of Tennessee, Knoxville, has published a study in which he reveals a surprising crocodile behavior.

According to his research, crocodiles are playful and sociable, despite their horrifying appearance.
Dinets shows that crocodiles enjoy many playful activities like playing with balls, sifting waves or piggy back rides.

After studying them closely, the researcher found that crocodiles enjoy playing with water streams, love ceramic artifacts, wooden balls and love to “hunt” different objects that float in the water.

Dinets wrote is his study that his is one of the first studies that concern the crocodiles’ playful behavior. According to him, crocodiles have three types of ludic behavior: object play, locomotor play and social play.
Since this is the first scientific study that looks into the more pleasurable side of crocodilians, scientists believe that this could also help better understand the evolution of animal intelligence.

The study reveals that playful behavior is common among any creature, not only in humans.
Vladimir Dinets has been studying crocodile behavior for more than a decade. His previous studies revealed that crocodiles are also good tree climbers, are sociable animals and use their intelligence to lure their prey using different objects.

The study also reveals that crocodiles can get attached to humans and can consider them to be reliable playmates.
The researcher recounts a story in which a man rescued a crocodile after being shot in the head by hunters. The man took the crocodile, fed it and cared for it, and developed a very close friendship with the creature that lasted for more than twenty years.

The man and the crocodile became good friends and used to play together without any restrictions.
The study that reveals surprising crocodile behavior was published in the magazine Animal Behavior and Cognition.
Image Source: independent