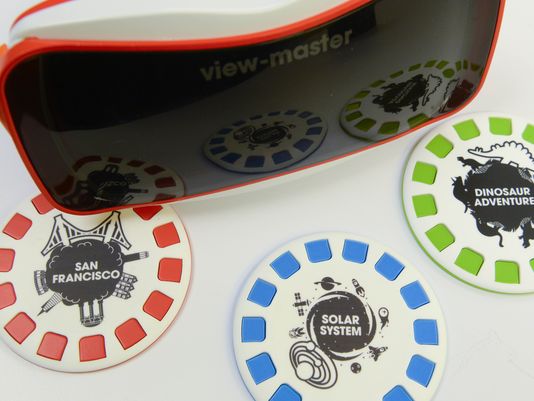 Attempting to prove that you don’t require an Oculus to enter the virtual world, Google teamed up with Mattel to achieve an iconic View Master makeover.

On Friday, the two companies revealed their intentions of bringing a reality version of the View Master to the market. For those who aren’t familiar with the View Master, it was one of the best-known picture viewers. It was launched back in 1939, when a colored picture disc would bring images to 3D life.

For this re-invented version, expected to go on sale later in 2015, Google software was used. By using the tech giant’s cardboard technology, the new View Master will work with a plethora of smartphones: the device simply slides into the View Master and is then connected to a corresponding app. So it basically works as a lens-equipped smartphone holder.

Mattel will also provide a specific application for the device, but the View-Master will also be compatible with any Google-cardboard VR apps.

This one-of-a-kind device will allow children to witness 3D scenes as if they were actually there. From Alcatraz to Earth during the Jurassic Period, the streets of Paris or the dark side of the moon. There is virtually no limit to the device, as technology now allows the creation of certain scenes that would otherwise not be available.

Say you want to see San Francisco Bay- the View Master will actually provide real images of the area. However, when wanting to see dinosaurs or the moon, scenes will be enhanced with CGI technology.

“We are also in the process of adding light gaming — interactivity is the key to making this work,”

And, as safety is always a matter with such matters, Mattel insisted to ensure parents that the product had been rigorously tested. International pediatric ophthalmologists had inspected the device and the View Master received a green light. As opposed to other virtual reality headsets currently on the market, the View Master will not cause dizziness, Mattel claims.

This iconic View Master makeover will surely ensure that Mattel become a bit more competitive in the toy aisle, especially since Barbie dolls have always proven to be a challenge. According to company officials, the device is safe to use by kids aged 7 and over.

Apart from being used as a children’s attraction, the View Master did have some particular uses. The medical industry, for instance, used it when attempting to envision the human body’s intricacies, especially with particularly difficult surgeries. During WWII, the device was also used as a way of spotting enemy aircrafts before boarding fighter jets.

This exciting remake is expected to be shipped around October and will be priced at approximately $30.