The Affordable Care Act was created as a means to provide fair health coverage for low-income Americans, but it seems that, in the process, the legislation has wronged other hard-working citizens. While millions are awaiting to enroll for healthcare before the sign-up deadline, other Americans in over two dozen US states can’t actually enroll because of a health coverage gap.

Take a part-time working American who earns just a bit more than would qualify him or her for Medicaid but certainly not enough to afford other types of health plans. In such cases, the person in question is now forced to pay a tax penalty of $180 (approximately 1% of his or her yearly income) so as to remain uninsured for an additional year.

Yet, sadly, the $180 penalty turns out to be the cheaper choice when balancing against a proper health insurance plan, so many Americans seem to go for the former. And since Sunday’s deadline is slowly creeping up, you can either choose to pay the penalty or discuss federal subsidy options with experienced exchange advisers.

Across the United States, approximately 4 million Americans fall into this health coverage gap. And Texas is the leading state when it comes to both the highest rate of uninsured citizens and the largest number of citizens ineligible for Medicaid.

There is a silver lining, however, to this otherwise bleak-looking situation. For the millions of low-income Americans who, under the current Medicaid requirements, are ineligible for either health plan or federal subsidies might be eligible for a tax penalty exemption.

As Texas Enroll America director, Mimi Garcia explains, the tax penalty actually means that citizens unable to afford health insurance are actually hit twice. So, in conservative states such as Texas and more than 20 others, where Medicaid coverage has not been expanded, citizens are receiving the required legal assistance from nonprofits as well as volunteer tax advisers so that they can file for the penalty exemption. 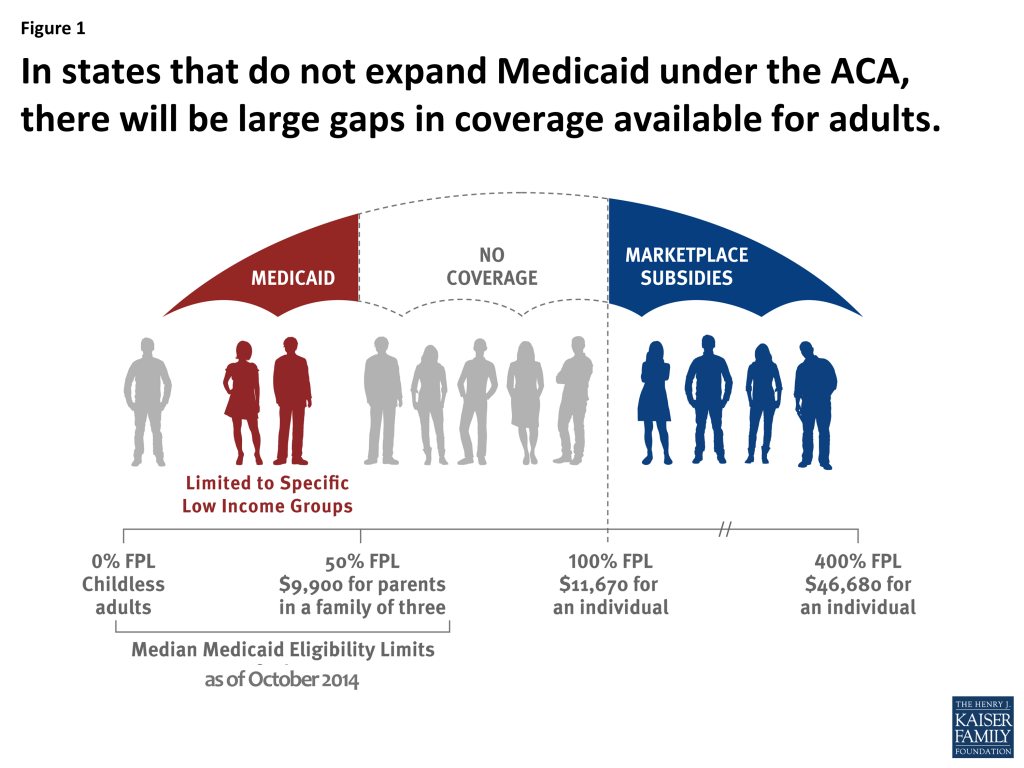 Consequently, near to 1 million uninsured Texas citizens who fall into the health coverage gap will be able to file the documents required for the penalty exemption, Marjorie Petty, U.S. Department of Health and Human Services Regional Director, said.

In order to apply for the exemption, the taxpayer must first apply for health coverage through the insurance exchange. If this is not granted and if the person does not meet the requirements to qualify for Medicaid, the tax form may be filed.

This penalty exemption became possible because of the Internal Revenue Service (IRS) when the gap became so noticeable. According to the exemption form, those taxpayers unable to expand Medicaid and whose household income equals (or is under) 138% of the federal poverty level could file for the exemption. So if an American earns less than $16,104 or if a 4-person household has earnings of less than $32,913, he or she is eligible for the exemption.

The same exemption applies to other categories, such as undocumented immigrants, Indian tribe members as well as prisoners.

This seemingly difficult situation arose, as Cheryl Parcham, Families USA private insurance director says, because certain states refused to expand Medicaid although the entire idea behind the Affordable Care Act was expansion. Yet, according to a Supreme Court ruling in 2012, no U.S. state can be mandated to expand its Medicaid program. As a result of the states refusing the expansion, millions of residents are now left in the gap.

And the tax penalty will only increase. This year, it will reach 2 percent of a citizen’s yearly income or $325 (whichever is higher). In 2016, the penalty will exceed $695 or 2.5 percent of the yearly income. According to the Treasury, a maximum of 20% of taxpayers will file for a penalty exemption on last year’s tax returns.
Image Source: Reporting on Health Kaiser Family Foundations