You are here: Home / Tech & Science / Amazing Solar-Powered Sea Slug Can Survive for Months without Food 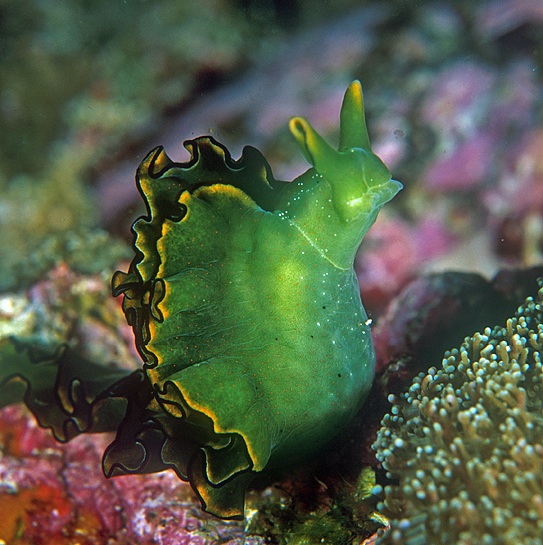 A group of U.S. researchers was able to better understand the hidden mechanism employed by a green sea slug that uses genetic material stolen from the algae it eats to stay alive for months without food in a well-lit environment.

The green slug, scientifically dubbed Elysia chlorotica, thrives in the shallow waters off the east coast of the U.S. Scientists recently discovered that the strange creature employs a gene “stolen” from the green algae it eats to maintain the chloroplasts in his gut fully functional.

Past studies had revealed that chloroplasts somehow turn the sea slug into a “solar battery” that can last nearly a couple of months with no food.

However, past researches couldn’t detect the gene that keeps chloroplasts photosynthesizing within the solar-powered sea slug ’s gut. But the latest study could, and now scientists hope that the new discovery will help to the development of improved techniques to cure genetic diseases.

Elysia chlorotica is brilliant green because it has transparent digestive glands that the slug fills with green chloroplasts stolen from the algae it uses as food. The slug can also absorb carbon dioxide and stay alive through photosynthesis, just like plants do, making it an odd plant-animal hybrid.

Ferris Jabr, co-author of the study and researcher at the Marine Biological Laboratory in Woods Hole, Massachusetts, explained that the sea slugs ingest algal chloroplasts from the sap of algae they consume but do not digest them right away like most slugs do.

Instead, Elysia incorporates the chloroplasts in its cells and store them for weeks to months in its transparent digestive glands. Somehow, the stored organelles remain active and still photosynthesize from within the animal.

However, the process defies normal, according to researchers:

In order to photosynthesize, the chloroplasts inside an alga depend on many genes in the alga’s own nucleus and the proteins for which they code. Tearing chloroplasts out of algal cells and asking them to make food inside a slug’s gut is like expecting the bottom half of a blender to puree some carrots sans the blade and glass jar.”

And to make it even more complicated, researchers at the University of Dusseldorf injected the slugs with a drug that shuts down photosynthesis. Still, the animals survived more than 55 days, although they had gotten paler and smaller, researchers reported.

And the new study may have an explanation for this. Scientists used flourescent DNA markers to distinguish algal genes from the genetic material of the slugs. They found that an algal gene repaired damaged chloroplasts, while getting passed on to a new generation of slugs.

There is no way on earth that genes from an alga should work inside an animal cell. And yet here, they do. They allow the animal to rely on sunshine for its nutrition. So if something happens to their food source, they have a way of not starving to death until they find more algae to eat,”

explained Sidney K. Pierce, one of the researchers involved in the finding.