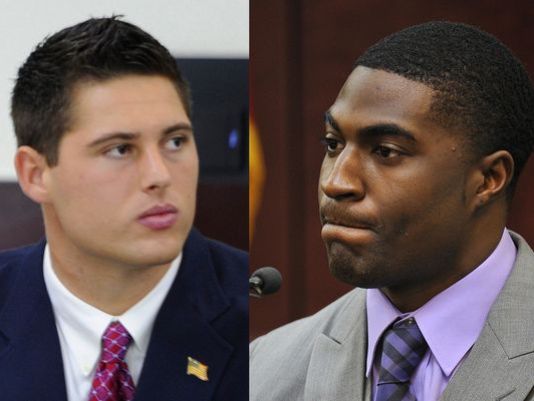 On Tuesday, two ex-Vanderbilt football players, Cory Batey and Brandon Vandenburg, were found guilty of rape and aggravated sexual batteries. The two were charged for an incident on the Vanderbilt University’s campus that occurred 2 years ago.

The jury deliberated for three hours before giving the verdict and rejected the defense lawyers’ claims that the two men didn’t know what they were doing because they were to drunk. Also, blaming the culture of study hard party hard on college campuses didn’t help either.

When they heard the news Batey kept starring ahead and didn’t move a muscle, while Vandeburg kept shaking his head saying “no.” His father was outraged and suddenly left the court room.

The victim was a female-student aged 21 when she was raped. She was also present Tuesday in the courtroom and burst into tears when she heard the verdict.

The verdict is the result of two weeks of hot debates and dramatic testimony ex-Vanderbilt students, the victim, and the Nashville police. During those debates, the jurors saw even cellphone photos and videos of the rape taken by Vandenburg, who sent them to his friends on the night of the attack.

The victim said that she had no idea what happened to her when she woke up because she had been unconscious due to a high intake of alcohol. However, many witnesses saw her unconscious and partially naked that night and no one reported it to the police, or at least to the college staff.

And the rape would have probably gone unnoticed if the university hadn’t found compromising images on the closed-circuit TV. The videos showed clearly the two players carrying their half-naked, unconscious victim into an elevator and down a hallway into a dorm room, while taking pictures and making fun of her.

Attorneys also argued that their clients were too drunk to know what was happening bringing up the college culture of binge drinking and sexual promiscuity argument. However, Tom Thurman, the Deputy District Attorney, told the jury that the argument was a “red herring.”

That’s the culture that you really saw here . their mindset that they can get away with anything,”