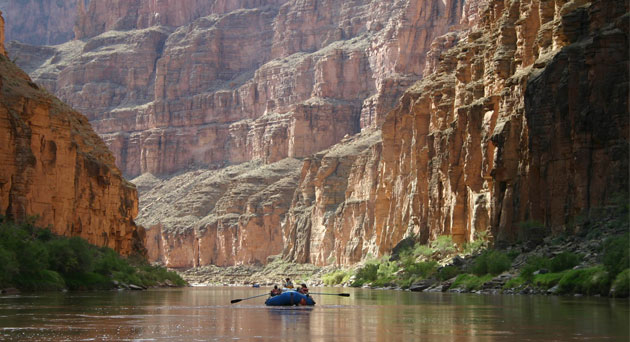 Deciding on the trademarking the Grand Canyon lodge names is a difficult task for the National Park Service, but the Xanterra Parks & Resorts proposal might gain approval. If you are among those who are lucky enough to have visited the Grand Canyon, you know that the historic lodges inside the park are as representative as the canyon itself.

El Tovar, Bright Angel Lodge, Phantom Ranch are only some of the most appreciated cabins situated in the national park. Their names have the power to evoke beautiful landscapes, fabulous rapids and golden levels of geology. But maybe not for too long.

Last December, one of the oldest concessionaires of the Grand Canyon applied to trademark some of the famous names. The approval of the application would mean that future concessionaires of the Xanterra Parks & Resorts will pay a certain fee for using the current names of the park’s properties. Moreover, Xanterra will have sole ownership of the names and receive the power of take them from the lodges, which would then be in need of new ones.

This matter represents new and fairly unknown territory for the National Park Service, and they are taking their time with the answer, being aware of the consequences of their decision. The only other occasions when trademark policies were involved in national parks matters were in concern with the Yosemite Park in California and Hot Springs in Arkansas.

Xanterra’s contract, which expired in December, was renewed temporarily. Therefore, the company will apply again for trademarks for the properties they manage in the park. The reason behind this strategy seems to be clear for the experts: the famous names of the historic lodges are a pot of gold in the perspective of future concession contracts. However, Xanterra did not confirm nor deny this statement.

Some of the lodges have been based on location for a long time, and their names have been associated with the Grand Canyon even from before it was designated a national park. One of those properties is the famous El Tovar, which has a splendid view overlooking the canyon.

Even though the Park Service did not make public any intention of opposing the application, the agency stated that future concessionaires will have a guideline in the matter of naming and appointing logos to properties associated with the park.

The value of famous lodges and hotel names in the Grand Canyon National Park is not as high as the figure valued by the Yosemite concessionaire — $51 million. The Grand Canyon current property value amounts to approximately $3.5 million.

The application proposal states that future proprietors will not be compelled to pay the trademark fee. They could instead choose to rename their properties and be spared of huge pay offs. If the successor concessionaire does not want to pay for the intellectual property copyrights, that decision will be legal and allowed.

Derrick Crandall, member of the counsel at the National Park Hospitality Association, said that the investment in building recognition and trusting brands among the park’s properties is much like the strategies of hotels and businesses all around the world.

Doug Sylvester, dean of Arizona State University, stated that the proposal has a very good chance of receiving approval for the trademark process. However, he encourages the National Park Service to oppose the proposal and to request that all the concessionaires have the right to continue to use the trademarked names for a fee and under legal contract.

The process of renaming the well-known establishments would mean a certain devaluation. For those who are well acquainted with the park and its properties, the names represent an important value in themselves, and changing them will be disappointing.

The names are part of Grand Canyon’s appeal, they are part of its history. For example, the El Tovar Hotel gets its name from a Spanish conquistador and it is now renowned for the extraordinary landscape within its location. Also, Bright Angel Lodge is named after a widely appreciated hiking trail in the park.

A distinguished geologist, Wayne Ranney, worked for a while as a backcountry ranger at the Phantom Ranch, which is another famous estate. In his opinion, the cabin, cafeteria and lovely trees which are part of the property will never be associated with any other name. Phantom Ranch is located far inside the park, and the only way to get there is by foot, mule or, if you’re passionate by it, rafting. The original designer, Mary Jane Coulter, used building materials from location. The people who have had the chance to visit the cabin in the past are very opposed to any change in the property’s identity.

Ranney’s worry is about the heritage of the National Park, which will be compromised if these names will suffer changes. The legacy belongs to all of the visitors, not only to the concessionaires, and they should treat it in consequence.
Image Source: Fodors Travel