You are here: Home / Health / Trachea Restoration Success with the Help of 3D Printing 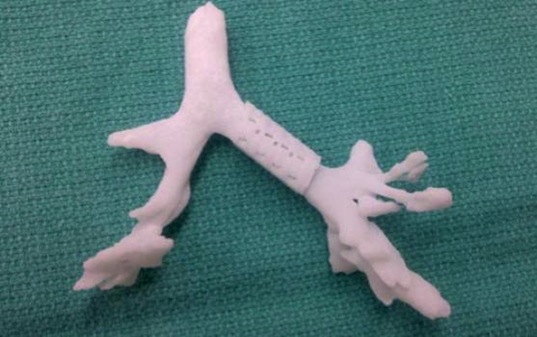 Researchers have succeeded in doing a trachea restoration, building a new trachea with the help of a 3D printing technique and successfully implanting it into a live animal.

PhD candidate at the Feinstein Institute of Medical Research at Hofstra North Shore-Long Island Jewish School of Medicine, Manhasset, New York, Todd Goldstein, stated that the combination of tissue and 3D printing engineering makes possible the designing and production of complex tissues and organs that will someday save millions of lives.

Goldstein revealed during a press conference that he and his research team have succeeded in doing a trachea restoration, creating a trachea from scratch and then successfully implanting it in animals. He said that the trachea functioned well and that the animals survived.

Naturally, there is plenty of more research that needs to be done until the technique is approved by the Food and Drug Administration, but scientists hope that in 10 years from now this procedure is going to help tens of thousands of people.

The trachea in itself is a simple, yet complex tube. It is simple because acts as a tube between pharynx and larynx and the lungs and it is complex because there are cartilage rings that are very hard to recreate. But now, with the advancement of 3D printing, the trachea just became the number one candidate for 3D printing because of its cartilage rings that can be easily recreated with a 3D printer.

When a trachea is damaged, it affects the ability to breathe and scientists have managed to resect out the diseased segments and simply replace them with healthy segments that were 3D printed from the patient’s own cells.

This feat of engineering, as the scientist are calling it, starts from a simple biopsy from the patients. The cells are then grown and seeded into a scaffold that had previously been printed using a 3D printer. When the cells have populated the trachea, it is then implanted into the patient and the risks for rejection are minimum.

The printer used in this case is a three dimensional printer called the Makerbot Replicator 2x Experimental.