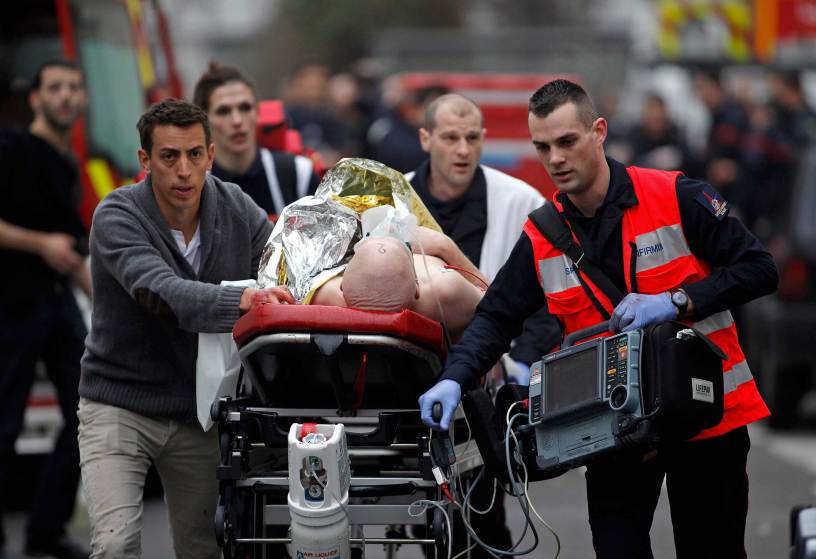 Charlie Hebdo, a satirical French newspaper was charged by masked gunmen shouting Islamic phrases. At least 12 people were killed in this terrorist attack. President François Hollande declared that the attack was an assault on freedom of the press and an act of terrorism. The nation alert for terror was raised by French officials to the highest level.

The latest information is that three masked gunmen charged Charlie Hebdo armed with Kalashnikovs. They shouted “Allahu Akbar” (an Islamic phrase that translates “God is great”) and “prophet was avenged.” Two police officers and ten top journalists were murdered. The police officers that were assigned to protect the journalists and cartoonists were killed. During the terrorist attack journalists sought shelter and safety on the roof.

10 prominent cartoonists and editors were killed, including cartoonists Jean Cabut, known as Cabu, Stéphane Charbonnier, who signs his work as Charb, Georges Wolinski and Bernard Verlhac.

Until now no claim over the responsibility of this bloody attack was made. From the last two decades or more this is the deadliest attack on the territory of France.

In 2011 the office of Charlie Hebdo magazine was the target of a firebomb attack, and was severely damaged.

There is a speculation that leads to Islamic militants involved in extremist groups or who acted alone. The satirized images of the Prophet Muhammad and Islamic terrorists which appeared over the course of time in Charlie Hebdo seemed to be the trigger of the 2011 attack and the one from Wednesday.

Charlie Hebdo is a magazine with respected tradition in France that uses insolence and satire to take on bankers, the police and politicians, religions of all rites. For example, this week it delivered a mock debate on the existence of Jesus.

Chancellor Angela Merkel of Germany offered condolences to President François Hollande and stated that this terrible attack is both an attack to the lives of French people and the security of France, and one to freedom of expression and the press, one that lies at the core of a free, democratic culture.

President Obama released a statement in which he said that Paris and France, the place where this monstrous attack happened, give to the world an everlasting  example that will last over the horrible vision of these murderers.
Image Source: Time