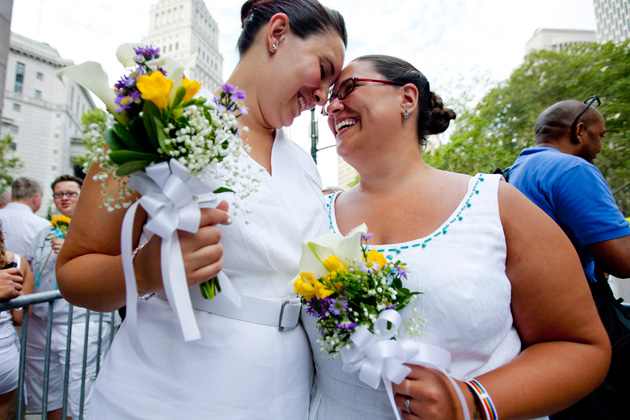 The US Supreme Court is still tackling gay-marriage bans. Many had hoped that Friday would mark the day when a definitive ruling on the matter of same-sex marriage would be heralded. Same-sex marriage has already become legal in 36 U.S. states as well as the District of Columbia. However, a ruling has yet to be issued and all hopes now lie on the next private conference scheduled to take place on the 16th of January.

And while the U.S. Supreme Court is expected to provide a definitive decision, a conservative appeals court has also heard arguments on the issue on Friday. The 5th U.S. Circuit of Appeals had to deal with the issue of marriage equality on the 9th of January as states such as Louisiana, Mississippi and Texas argued challenges to same-sex marriage bans. Skepticism was the prevailing sentiment during Friday’s hearings, as the judges heard arguments ranging from 42-year-old precedents to federalism and even procreation channeling endeavors.

Judge Patrick Higginbotham, Judge James Graves Jr. and Judge Jerry Smith made up the panel which assessed the arguments on marriage equality. Laughter broke out at times in the courtroom, especially when Judge Higginbotham countered a claim made by Mississippi’s attorney that the current state’s marriage law encourages citizens to have families. The judge candidly said: “You don’t need an incentive to have sex.”

The judge also highlighted important aspects throughout Friday’s hearing. For one, a nationwide change of opinions had occurred, he said, where gay rights were concerned. As such, there shouldn’t be any reason, he argued, why the state would allow sterile couples to marry but same-sex couples not to, if procreation were the only point of marriage. Moreover, Judge Higginbotham cleverly noted, it was in the same halls that words such as “will Mississippi change its mind?” rang not so long ago.

In fact, the panel of judges seemed to share a common viewpoint where the bans on same-sex marriages were concerned. Since June 2013, four distinct federal courts of appeal have challenged gay marriage bans, but dissension remains and the split among other appeals courts will most likely force the Supreme Court to decide during its current term.

The split among courts of appeals appeared in November, when the United States Court of Appeals for the 6th Circuit ruled in favor of upholding the bans on same-sex marriages in its allocated geographic region.

What’s undeniable, however, despite the split, is that advocates of gay marriage have built what seems to be unstoppable momentum: with 36 states legally allowing same-sex marriage, more than 70 percent of American citizens now reside in places where marriage equality has become a reality.

“The overwhelming tidal wave of court rulings over the last year has put America on the cusp of nationwide marriage equality,”