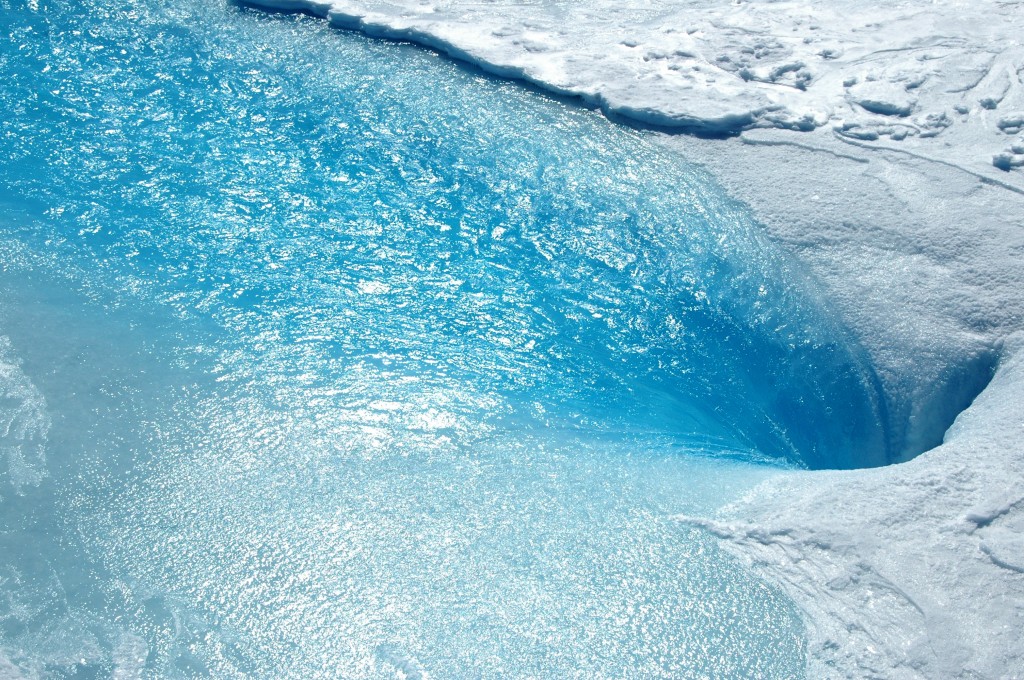 A new study may have solved the mystery involving the sudden vanishing of the water resulted from the melting of the Greenland ice sheet. UCLA scientists found that about a 25 percent of the water does not reach the global ocean. Instead it seems to linger in gigantic aquifers inside the ice.

The study was published on Monday in the journal Proceedings. The authors explained that they based their paper on evidence gathered three years ago while measuring the melting rate of Greenland’s ice sheet.

In the summer of 2012, the UCLA team noticed that nearly all of Greenland’s ice sheet was thawing right before their eyes. Researchers found that a small part of the meltwater was absorbed by Greenland’s thick ice sheet, while the vast majority of it formed turquoise rivers and streams on the sheet’s surface.

However, the most disturbing phenomenon was related to those streams and rivers suddenly vanishing into ice cracks called moulins. UCLA researchers launched floating GPS beacons to signal where all that water was heading to.

During their research, scientists gathered data from more than 500 streams and rivers on a 3,600-mile surface. It seemed that water was being collected by the Isortoq River which flows into the sea. However, not all of this water eventually reached the river. It was, in fact, being caught underneath the ice sheet and did not re-emerge.

After entering the moulins, some of the GPS beacons that had been tossed tossed into several streams remained stationary. The ice holes engulfed as much water as they would if it would have rained an inch of rain per day, every day.

Scientists said that some moulins opened up in less than 30 minutes. So, it is no wonder that water was so quickly vanishing from sight.

one of the UCLA scientists reported.

The scientists also noticed that not all water going down in the ice cracks was coming out into the Isortoq River. This mystery has puzzled several other scientists.

“People have gone as far as throwing rubber ducks down the holes to see where the rubber ducks come out. And no one has ever found a rubber duck,”

said Tom Wagner, researcher at NASA, which funded the study.

UCLA scientists say that the missing water ends up in huge aquifers underneath the ice sheet. A Greenland aquifer was estimated to be as large as West Virginia. However, 18 months later the team found that the missing water came out eventually. Still, during the winter season, the streams seem to shut down, researchers say.