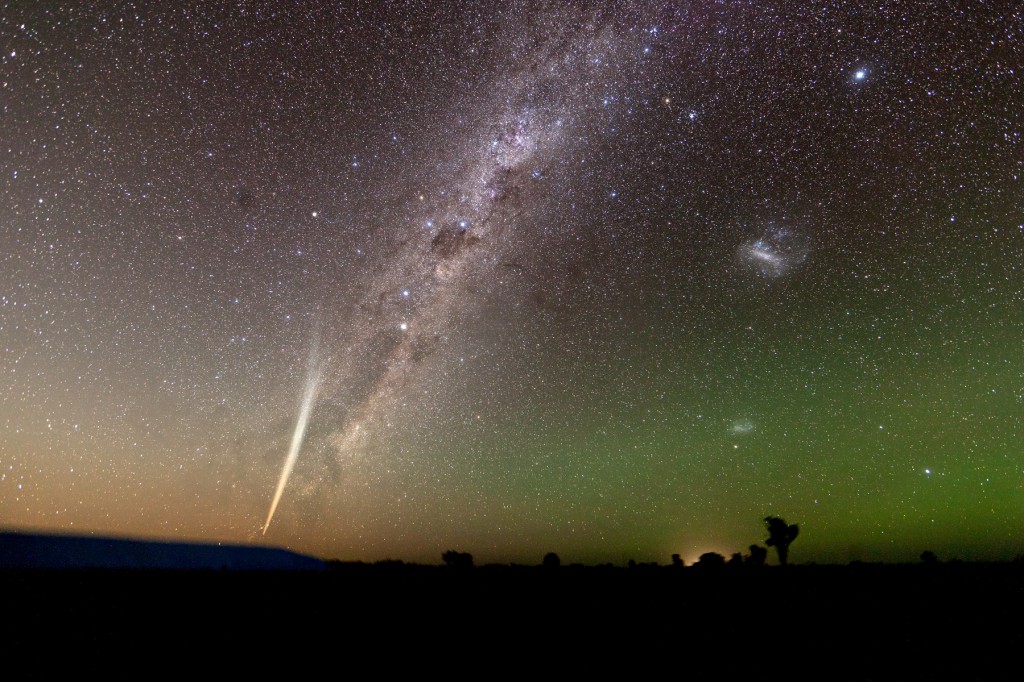 The New Year brings many astronomical events. After the meteor shower in the beginning of January, space enthusiasts look forward to seeing the Lovejoy comet on Wednesday Jan 7 when the green beauty will reach its closest point to Earth at a distance of 70.2 million kilometers (or 43.6 million miles).

The C/2014 Q2 comet was named after its discoverer, Terry Lovejoy, novice astronomer from Queensland, Australia who first spotted it on August 17 of last year.

This long-period comet travels on an elliptical 14,000 year long journey around the Sun. Scientists calculated that its farthest point from the Sun is located at a distance of about 90 billion kilometers. It reaches its closest point to Earth once every 8000 years.

Traveling at the amazing speed of 15 miles per second or 54, 000 miles per hour, it will reach its closest point to Earth on January 7.  As luck would have it, the date corresponds to a moonless night so there is no need for high tech gear in order to spot this rare beauty. If skies are clear, people will be able to see it with the naked eye. The best dates for observers will be January 7 and the 11th.

One will be able to spot the comet on January 7 near the Orion’s Belt. The best time recommended is late at night, as it will be positioned at about 30 degrees south of Orion. One should look for it on the lower right of Sirius, the brightest star in the southern sky.

The thing that makes Lovejoy’s comet so unique is its bright green color. The C/2014 Q2 is made up of different types of ice, rock, gravel and dust, all of which are held together by carbon dioxide. The comet’s icy tail is turned into gas under the pressure created by solar winds and sunlight. As the gas blows under the immense pressure, cyanogens and diatomic carbon are released from the comet, turning bright green under sunlight. Thus results the comet’s amazing green tail.

By using the astronomical magnitude scale, astronomers calculated the comet’s brightness. According to the measurements, the brighter the comet, the lower its rank. At first, Lovejoy’s comet had a brightness level of 15. Its magnitude has increased since initial calculations, astronomers expecting it to reach a 4 in brightness by the time the comet passes Earth.

If everything goes according to calculations, viewers will be able to observe the C/2014 Q2 without any special device. Standard 10×50 binoculars should suffice.

For maximum visibility, we recommend seeing the comet in an area unpolluted by light, open fields for example.
Image Source: Wikipedia