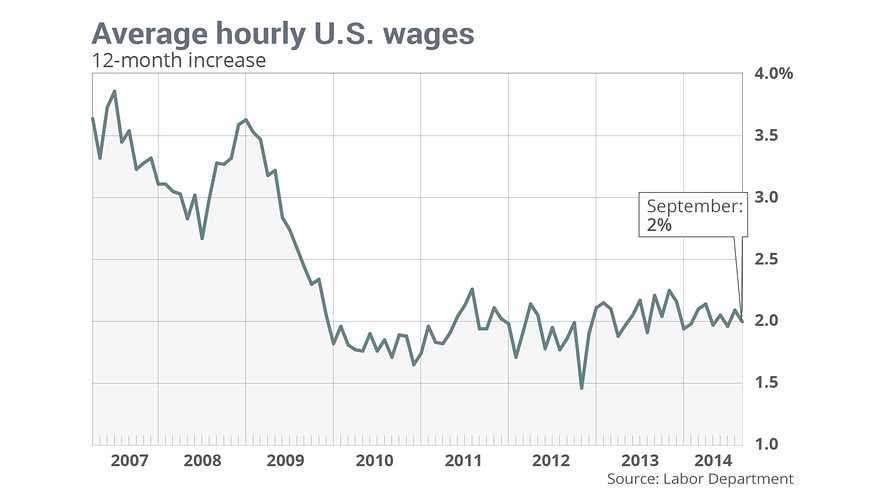 United States employers have shown their growing confidence in the economy by adding the largest number of jobs in the last 15 years. And despite this evident positive trend, Americans still can’t fully experience the economy’s recovery as the slow wage growth despite solid hiring streaks fails to translate into more money for the average citizen.

2014 was a stellar year where hiring is concerned. Approximately 3 million jobs were created and December caped this excellent year with 252,000 new jobs. As a result, the unemployment rate has decreased from 5.8 to 5.6 percent and yet, Americans hardly feel the improvement.

In all fairness, when addressing the issue of unemployment, the 0.2 percent decrease in the unemployment rate can also be explained by the fact that many jobless Americans simply gave up their search for work and weren’t listed as unemployed anymore.

Economists explain that, normally, a recovering market should have firms increasing wages to ensure the loyalty of their workers. Yet paychecks can hardly keep ahead of inflation. In fact, December brought a five cent drop in the average hourly income. According to Mr. Richard Moody, Regions Financial economist, such decreases in hourly earnings represent a cause for ongoing frustration.

One possible explanation is that businesses wait for inflation to rise before increasing wages to their ideal level. This is one of the reasons why wage growth remains stagnant despite a declining unemployment rate and an expanding economy.

More importantly, decreasing oil prices and timid wage growth are contributing to the low inflation levels. However, this may change when the Federal Reserve’s policy committee decides that inflation should rise to its 2 percent target.

Michael Strain, American Enterprise Institute economist, believes that inflation is still far from taking off. In fact, there are many economists who are confident that inflation will not reach 1 percent in 2015. It’s believed that nominal wage growth should exceed 3.5 to 4 percent so that price inflation can exceed the Fed’s 2 percent target. Yet it is precisely this 3.5 to 4 percent increase that will translate into Americans reaping the benefits of the economy’s growth, the Economic Policy Institute explains.