You are here: Home / Tech & Science / Sea Turtles Use Earth’s Geomagnetic Field To Find Their Nests 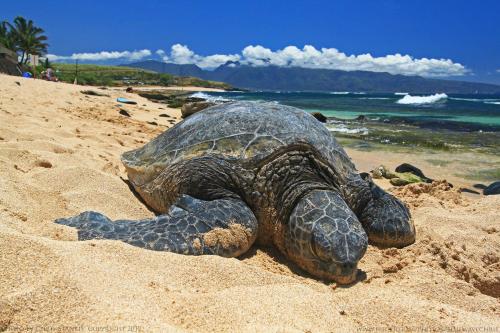 Scientists have been struggling to understand how can a female sea turtle, after traveling for thousands of miles in the vast oceans, can swim back to the exact same beach where it laid its eggs the previous year. This has been a mystery to many scientists for years, until now.

The sea turtle spends most of its life swimming in the open oceans. They travel for thousands of miles without anything to guide them and all they see from all sides is the blue immensity of the ocean. Still, with no guideposts, the sea turtle is able to return to the place where it got out of its egg to dig nests and lay eggs of its own. The sea turtle does this every two or three years, a behavior the scientists call natal homing.

There have been many hypothetical theories on how can the sea turtle manage to find the exact same spot without any guide points to help it recognize it. One of those theories implies that sea turtles actually use the Earth’s geomagnetic field as a guide when they are traveling. The geomagnetic field helps the turtles find the exact same place where they were born. Until now, the scientists did not have any evidence that could support this particular theory.

A team of scientists published a study in the journal Current Biology, in which they claim that the Earth’s magnetic field suffers subtle changes which can affect where the sea turtle buries its eggs on a coast in Florida. This is actually the first clue attesting the scientists’ theory that sea turtles are affected by the geomagnetic imprint and use it to orientate themselves while swimming in the oceans.

The Earth’s geomagnetic field resembles the magnetic field that exists around a bar magnet. The geomagnetic field is more intense at the poles and its weakest point is at the equator, intersecting with the Earth at various different angles, the scientists call “inclination angles”.

One of the scientists involved in the study, and also one of its lead authors is J. Roger Brothers, from the University of North Carolina. He talked about the new study saying that sea turtles have developed a special way of using the inclination angle of the Earth’s geomagnetic field. Brothers says that this field is so intense that it acts like an internal GPS and turtles use it to travel around and find their destination.

In order to demonstrate that the female sea turtles use the Earth’s geomagnetic field as a navigational instrument to locate their birth beaches, the scientist analyzed the data gathered over a period of more than 19 years. The data had been collected by the Florida Fish and Wildlife Conservation Commission, which has been studying the sea turtles’ nesting places on the Atlantic Coast of Florida. This area is also the largest gathering place for sea turtles in all of North America.

Although this is a step forward in understanding the sea turtles’ navigational behavior, there are still questions without a precise answer. For example, the scientists have not yet figured out how can the turtles detect the geomagnetic field in the first place.

Brothers shared one of his theories on this subject: he believes that the sea turtles have small magnetic particles inside their bodies or their brains. These tiny particles act like a compass and turtles use it to guide them through the oceans. Brothers said that this theory does not have any conclusive evidence yet.

Kenneth Lohmann, the co-author of the study, explained that it’s very hard to detect the magnetic receptors inside the turtles’ bodies because these small particles could be scattered throughout a large volume of tissue.

Brothers added that although it appears that sea turtles use Earth’s geomagnetic field to guide them back to their nests, he is certain that it’s not the only navigational reference point they use.
Image Source: phys