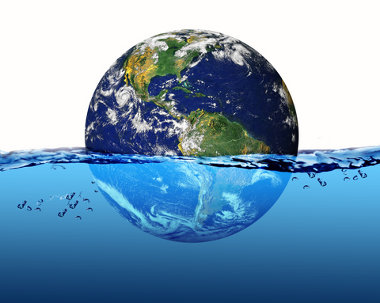 Scientists identified yet another problem caused by global warming: sea levels rising at alarming rates. A study by Harvard and Rutgers Universities was recently published in the journal, Nature, showing that sea level readings had been incorrect for much of the 20th Century, up until around 1990. The sea level was actually 30% lower than originally thought, having risen 5 inches instead of 6. While this may sound like a good thing, it actually means that sea levels have been rising much quicker since that time.

Although an inch may sound like a small difference, it actually equates to around two quadrillion gallons of water across the world’s oceans. This extra water has been causing scientists problems for a long time as they try to match up their statistics with readings from harbors. It also means that tides have been rising about 2.5 times faster than they did from 1900 to 1990. This has been blamed on melting ice sheets and shrinking glaciers in Greenland and Antarctica, both of which can be blamed on global warming.

Sea levels have been traditionally measured by tide gauges, and while there are hundreds of them around the world, they are mostly located in Europe and North America, with very few giving readings of Polar Regions or the middle of the ocean. There are also issues with the land they are attached to having moved and wind and ocean currents can affect readings. New methods of reading sea levels use statistical analysis and computer models to attempt to fill the gap that the gauges cannot account for. Even so, the researchers do not claim this to be entirely accurate.

If the paper can stand up to scrutiny, it will give a much greater understanding of climate change and the effects it has on the sea levels. However, the results are worrying. Estimates now suggest that the sea is rising at around a foot per century, whereas even a rise of a few inches has cost governments billions in the fight on coastal erosion. There is also evidence that the breaking of the great ice sheets will push quadrillions of extra gallons of water into the oceans, which is likely to have a huge impact on coastal towns and cities across the world.