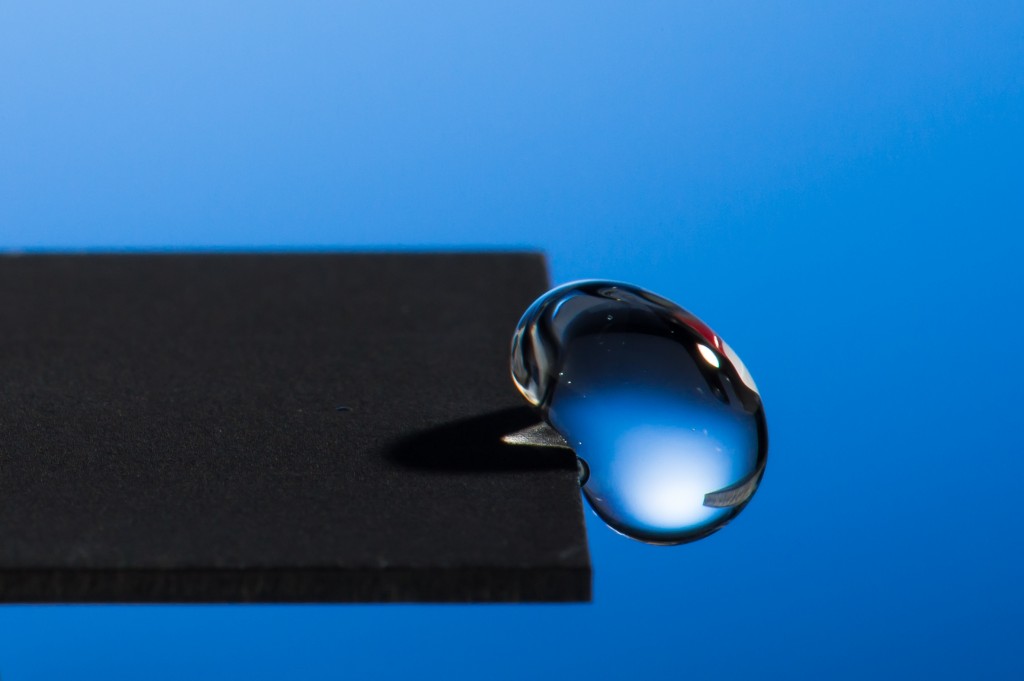 The tech world is advancing at a dizzying pace and the latest innovation is the use of a new laser technique that creates highly hydrophobic material. The paper that details the discovery was published in the Journal of Applied Physics.

As seen in the photo, the water droplet simply slides off the material, without leaving any trace behind it, which means that the material it is on is extremely hydrophobic. The metal it is on was treated with a new laser technique that renders it super-hydrophobic and it was created by scientists from New York.

The team of scientists that created this amazing material are from the University of Rochester in New York. They have worked on and succeeded in creating a material that is so hydrophobic that water simply slides off or bounced off it; the material was created with the help of laser beams.

This fantastic discovery can have a plethora of applications in real life: imagine the wings of a plane never freezing, because water can’t stay on them. The material could also be used in hospitals for better sanitation or for preventing rust.

Chunlei Guo, co-author of the paper and professor of optics at the University of Rochester, said in a statement about the highly hydrophobic material that it is so water-repellant that drops simply gets bounced off it, again and again until it rolls off its surface.

How could the creation of such a material be possible? Well, unlike other materials that are hydrophobic such as Teflon, the metals that were created by laser are permanent. Teflon is just temporary coating with hydrophobic material, but this material is shaped by laser and cannot change.

The team used powerful but short laser pulses to simply reshape the surface of the metals they wanted to make hydrophobic. The blasting of the metals with laser helped create micro ruts on its surface, and it is those ruts that make the material water-repellent.

Aside from being highly water repellent, the material is also very easily cleaned. After and during its cleaning with only a few drops of water, it remains perfectly dry, naturally.

Guo continued in his statement that the technique has several applications in developing countries:

In these regions, collecting rain water is vital and using super-hydrophobic materials could increase the efficiency without the need to use large funnels with high-pitched angles to prevent water from sticking to the surface … a second application could be creating latrines that are cleaner and healthier to use.