You are here: Home / Technology / Nintendo 3DS XL Coming to the United States on February 13 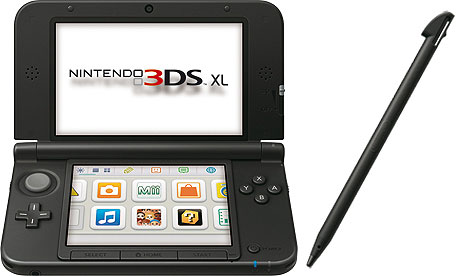 Nintendo announced that it will release the new Nintendo 3DS XL in the United States on February 13. A different version of the handheld game console was released in 2014 but there wasn’t any US release.

There are two versions of the new handheld game console: one called Nintendo 3DS and another one, with a slightly larger screen, Nintendo 3DS XL. Nintendo announced that only the second version will be released in the United States for the time being.

The new Nintendo console comes with some new hardware upgrades: it will feature a new face-tracking 3D technology, the processor is faster than on previous versions, it will have a second analog mini-stick, a built-in NFC that works with Amiibo game figures and two extra buttons.

Also, the new Nintendo 3DS XL will feature a microSD card instead of an SD, like on previous versions of the handheld game console.

Nintendo 3DS XL will come in red and black and will not have colorful buttons like other consoles have.
An AC adapter is not included with the Nintendo 3DS XL, although the console is compatible with older adapters of older versions like the 3DS and the DSi. Nintendo has not made any comments on why they did not include any chargers with their new product.

Nintendo also announced some new games that will be available in the near future. One of the most anticipated of those games is a new version of The Legend of Zelda: Majora’s Mask, which was optimized for the 3DS Nintendo version. The game will hit the stores on February 13, just like the Nintendo 3DS XL.

Nintendo revealed that they will release another 3DS game called Project S.T.E.A.M in March 2105. Also, Nintendo announced that they will release some new Wii U games, including Metroid Prime Trilogy and Super Mario Galxy 2, making them available for download later this month. These two games can also be played on the GamePad and they will cost $20 each. Nintendo said that it will be a promotional price when the games will be released and can be bought for $10 each.
Image Source: theguardian