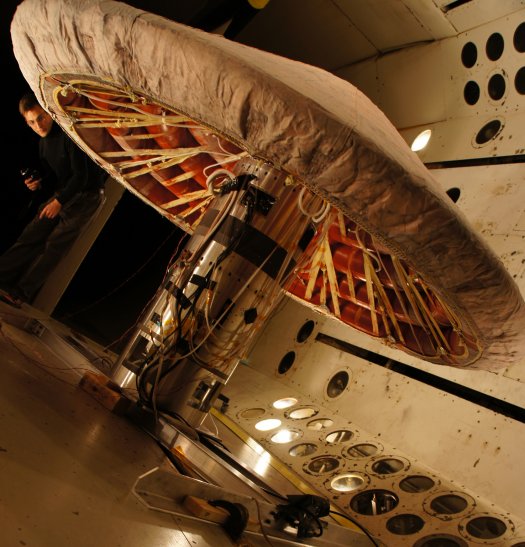 In order to successfully accomplish its goals for manned missions to nearby planets, NASA is testing inflatable heat shield technology.

Remember that toy you used to play with when you were a child? Yes, that cone shaped structure with donut rings that would descend in size as you gradually reached the cone’s peak? Well NASA certainly remembers. It actually inspired the agency to develop a new technology that could help rockets and their travelers reach nearby planets, especially Mars, in a safer, cheaper and more efficient way.

NASA isn’t the only agency interested in successfully sending astronauts to The Red Planet. Various public and private organizations such as Mars One, Mars Direct and Inspiration Mars together with billionaire entrepreneur Elon Musk have decided to get involved in the process that is unraveling at NASA’s Langley Research Center in Hampton, Virginia.

One of the current issues involving manned missions to Mars is related to landing the spacecraft. Because the planet’s atmosphere is a hundred times thinner than ours, the usual system made up of parachutes is inefficient. The same thing goes for rockets, which are used to land in surfaces without atmosphere like on the Moon.

As Neil Cheatwood, NASA’s senior engineer for advanced entry, descent and landing systems also explained, it is better to make use of Mars’ atmosphere as it reduces the quantity of fuel that is needed to be transported during the mission. He added: ‘We try to not use propulsion if we do not have to’.

NASA scientist came to the conclusion that they could use a very light inflatable heat shield that would be activated the moment the rocket enters Mars’ atmosphere. This would help spaceships slow down and land safely.

The landing technology is based on rings made out of light-weight materials. These rings will be filled with nitrogen and covered by layers of heat-resistant materials, similar to a thermal blanket. When activated, the shield would head the spacecraft. One of the advantages will be the extra storage space available on the spaceship.

Scientist successfully tested the Orion, the spacecraft expected to carry astronauts on future missions to Mars. Now they need to examine the next steps: the successful entry, descent and landing, all of which depend on this new technology.

The Mars exploration is important to many scientists since the 1960s when traces of water were detected. Water is one of the factors that contributed to life on Earth, thus the theory of life-forms to have existed or to still be present on the Red Planet.

This new technology is expected to be ready for testing in 2016 with the flight of the Antares rocket.
Image Source: Australian Popular Science