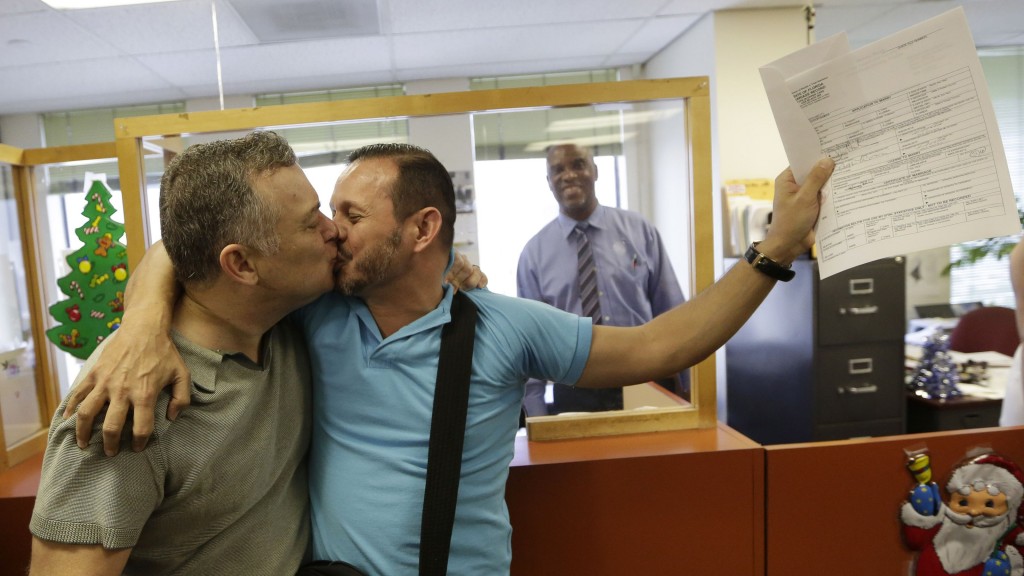 Monday was the day gay couples got married for the first time in Miami as Florida became the 36th state to legalize same sex marriages.

Miami Judge Sarah Zabel said that in her opinion there was no reason couples couldn’t get married right away and issued the first marriage licenses. Cathy Pareto and Karla Arguello, and Jeff and Todd Delmay. were the first gay couples who got married in Miami.

After the legalization in Florida, 70% of Americans are now living in states where same couples marriages are legal.

In Florida, the constitution stated in 2008 that same sex marriages were illegal. This was put to vote and won with 60% of the votes. Judges in the state found the decision discriminative, and we’re pointing out decisions made in the rest of the states. Florida Attorney General Pam Bondi has made many appeals which are pending in the state and federal courts, hoping the interdiction will be canceled. Jeb Bush, Florida’s former governor, said that each state should have their own definition of marriage.

Even though the news created joy and cheering, in the north of the country, there were some conservatives who showed disapproval. Clerk Ronnie Fussel from Duval County Court in Jacksonville shut down the chapel and said that no couples, gay or straight would marry there. This happened in other parts of north Florida as well.

In Orlando, a conservative legal group, named Liberty Counsel, is preparing to file complaints on Monday, in more counties from Florida. Their wish is to stop clerks from proceeding with same sex marriages. Their complaint would show how many changes happened in Florida since Anyta Bryant, a former beauty pageant and spokeswoman against gay rights in Miami from the 1970. Back then she stated that she doesn’t hate homosexuals and that she cares enough about them to inform them about on fact that God puts them together with other sinners.

The first weddings should happen in the same county, where Anyta Bryant stopped a Dade County ordinance meant to ban discrimination against homosexuals, 38 years ago.

Catholic bishops from Florida, expressed their disappointment for the approval saying that this will impact traditions.

“Because of this, redefining civil ‘marriage’ to include two persons of the same sex will have far-reaching consequences in society. Such a change advances the notion that marriage is only about the affective gratification of consenting adults.” catholic bishops said on Monday in a statement