You are here: Home / Business / McDonald’s Launches A New Strategy To Bring Back Costumers’ Love 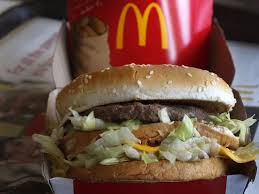 People’s shifting eating patterns, high competition and low sales are the main challenges the fast-food industry has been facing recently. One of the post popular hamburger producers, McDonald’s launches a new strategy to bring back the ‘love’. This approach is seen as an attempt of the world’s greatest fast-food chain to keep its clients. Practically the food chain will stress the word ‘love’ in its ads displaying the well-known “I’m Lovin’ It” motto.

As a feature of the campaign, McDonald’s will introduce TV commercials starting this week.  One of them is an animated footage in which famous Disney Characters like Joker and Batman or the Smurfs and Gargamel display warm feelings towards each other and eat together McDonald’s items. The peppy spot closes with the words “Choose Lovin” inside a ring of hearts.

The ‘love’ campaign might have something to do with the difficult times the famous fast-food chain is facing. Eating patterns are changing while competition is increasing and McDonald’s workers are demanding higher wages. This reflected in the company’s’ figures on its main market, U.S.  Even if the company saw two CEOs in less than two years, sales still dropped by 4.6% the past November in U.S.

Brands association with a positive and inspiring feeling is not one of a kind in the advertising industry. Perhaps the most famous, Coca-Cola has branded itself exactly by connecting its soda to happy times.

According to Allen Adamson, Landor North America’s executive , McDonald’s aims at achieving something comparable with Coca- Cola by putting the whole company behind a broad, basic concept that is on top of the food quality issue. He added that the test for the fast-food chain will be in linking “love” once more to the experience of consuming food at McDonald’s.  In other words the company needs to find a sustainable connection between loving and the dining experience.  Nevertheless, the advertising expert said that the new campaign might provide a more cohesive approach that will enable the company to handle better its various problems.

As a component of the campaign announced on Friday, McDonald’s is likewise changing workers’ uniforms as well as the food packaging. The new boxes will show pictures of popular food items against a white setting.

McDonald’s had wanted to present its new marketing approach at a media event mid- December but decided to postpone it in the end.  Also, after Friday’s official launch the fast-food giant did not appoint any representative to give further details about the campaign. Instead it preferred to post a video in which Deborah Wahl, chief marketing officer for McDonald’s USA made a few statements.