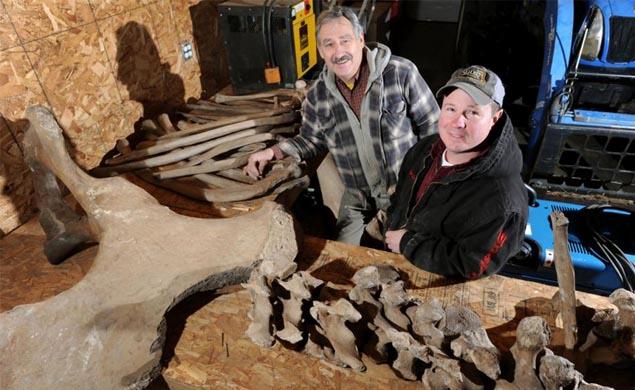 Two men from Michigan have unearthed the bones that belonged to a giant Ice Age creature, the distant relative of the modern-day elephant, the mastodon. The bones were right in the backyard of one of the two men.

Daniel LaPoint Jr., a contractor, and Eric Witzke live in Bellevue, Michigan and were working in Witzke’s backyard when they noticed something strange poking out of the earth. When they approached it they saw that what was coming out of the earth was a very big rib bone. Over the course of two days the two men dug up the whole backyard and found 42 mastodon bones that were perfectly conserved.

When they first saw the bones, the men’s first thought was that the bones were actually dinosaur bones. They were later told that the bones belonged to a 5 ton mammal that lived during the Ice Age and was the smaller relative of the wooly mammoth, both species close related to the elephant.

The men said they intend to keep only a couple of bones as souvenirs to remind them of the spectacular discovery but they will donate the rest of the mastodon bones to the Museum of Paleontology at the University of Michigan.
A paleontologist from the University has examined the bones and said the animal may have been killed for food by ancient humans thousands of years ago.

Daniel Fisher, the paleontology expert who examined the bones said that according to preliminary studies of the fossils indicate that the mastodon may have been slaughtered by early humans. Fisher said that after examining the bones he can say that the mastodon was approximately 37 years old and lived sometime between 10,000 and 14,000 years ago.

According to experts, the mastodon lived around the time the first Paleo-Indians arrived in the Michigan area, more than 12,000 years ago.

Although Fisher examined the mastodon bones, they were not taken to the museum yet. The two men who unearthed the bones wanted to show them to a middle school from their town so that the children can see and touch them. One of the men explained that as a kid he had always wanted to touch the bones exhibited in museums but never got the chance.
Image Source: nydailynews