You are here: Home / National News / Massive Pileup on I-93 in New Hampshire; 12 Injured, One Critical 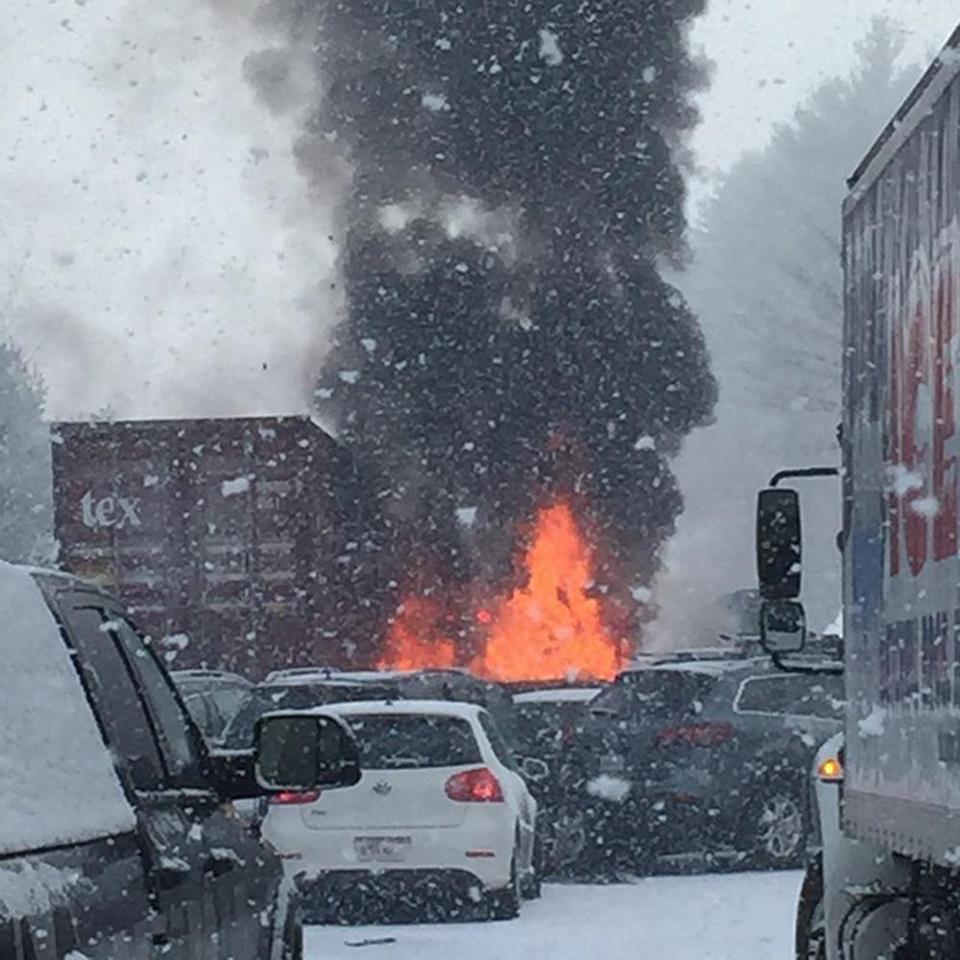 On Friday morning, about 35 vehicles got caught in a massive pileup on a New Hampshire interstate. Drivers said that a sudden snow squall reduced their visibility almost to zero, while breaks were useless due to slippery snow. Twelve people suffered minor injuries, while one person was seriously injured.

Local authorities closed the northbound lanes of the highway for about three hours until 1 p.m.

Drivers reported that around 10:00 a.m. a sudden snow squall broke on the Interstate 93 in Ashland, New Hampshire. The squall seemed more like a very “dense fog” that blocked their view and caused their cars to crash into each other. Thirty-five cars crashed and a tractor-trailer truck caught fire.

State Police reported that 11 of the injured people were rushed to Franklin Regional Hospital, while one was taken to Spare Memorial Hospital. However, their injuries were not life threatening. Only one person that was in a serious condition was taken to Dartmouth-Hitchcock Medical Center, Police spokesperson Michael Anderson told reporters.

Among the 35 vehicles caught in the pileup, one crashed into a tractor-trailer truck and caught fire. Three nearby cars were also damaged by the fire, while the cargo in the tractor trailer was also affected.

Authorities said that the pileup on I-93 in New Hampshire was a “major incident” caused by unexpected weather conditions and worsened by lack of pre-treatment of the roads and drivers’ preparation.

A New Hampshire Department of Transportation official said that the snow squall was so intense and quick, that although just before 10:00 a.m. I-93 was dry, three minutes later it was covered in snow and went slippery.

Police said that the crash was still under investigation.

Ben Coleman , a driver from Bristol involved in the I-93 crash, said that the snow squall started suddenly with no previous warning signs.

It was like coming out of a dense fog. You hit the brakes and the brakes aren’t working obviously, so it was car hitting car after car,”

Mr. Coleman’s car was hit twice in the incident – the back dumper and driver’s side mirror were damaged. But, Mr. Coleman said that the damages to his car were minor as compared to other vehicles involved in the pileup.

He also said that he saw how one of the nearby cars got pinned under the tractor-trailer truck and was quickly “completely engulfed in flame.”