You are here: Home / Tech & Science / Fossils Of Fish Skull Found In Siberia Gives Clues On The Origins Of Jawed Vertebrates 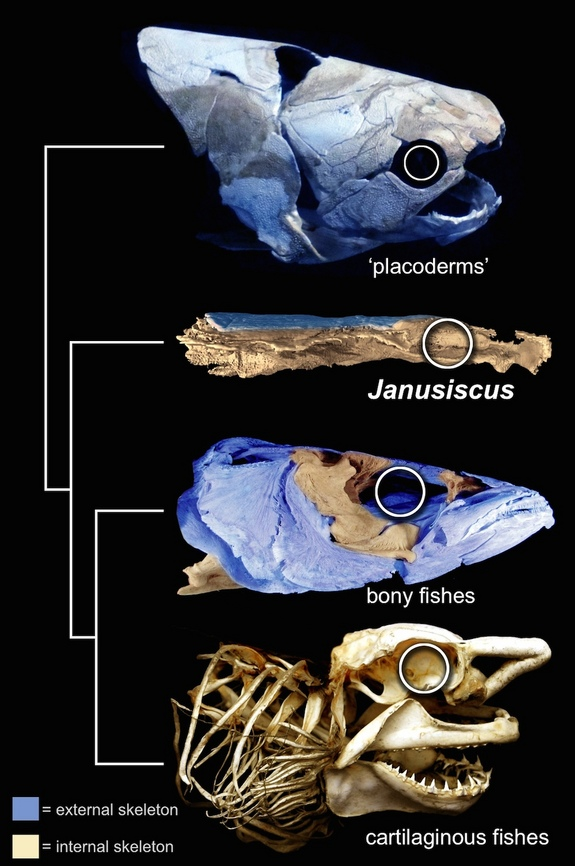 Studies of ancient creatures can tell us a lot about who we are and how we arrived here. A fish skull found in Siberia gives clues on the origins of jawed vertebrates, a recent study shows.

The skull, initially found in the ‘70s, was initially believed to belong to the remains of a bony fish. It’s size hardly reached 0.8 inches long.
The two types of living vertebrates with jaws are the boned ones and the cartilaginous ones. A deeper examination of the ancient fish proved that the fossil had the characteristics of both bony fish, like salmon and trout, and fish made of cartilage, such as sharks. Further research on the ancient fossil offered additional insight into what scientists thought they knew about the history if sharks. The research showed that sharks could be more evolved than the bony vertebrates.

“It’s surprising that something so tiny could have so much information in it.” said Sam Giles, the leader of the study and a paleobiology doctorate candidate at Oxford University in the United Kingdom.

The fossil was given a Latin name, Janusiscus schultzei. It represents a combination between “Janus”, the Roman god of transition, who was usually presented as having two faces and the Latin word “piscis” which means fish. The second part of the name came from the first scientist to describe the fossil, in 1977, Hans Peter Schultze.

The research team used a special computer which allowed them to create a 3D model of the fossil. The fine-detailed scans showed that the fish had sensorial canals on its skull, which are used by bony fish to detect predators and pressure changes in the surroundings. The skull appeared to have blood vessels at the inferior part of the brain, above and between the jaws, which have the role to provide oxygen to the brain. This sort of blood vessels are found in cartilaginous fish.

The main conclusion that researchers reached was that the common ancestor of bony and cartilaginous fish was composed of more cartilage than bones. This is what lead them to assume that cartilage vertebrates, like sharks, could have had a slower evolution than the vertebrates made of bones. But the fossil is a proof that the last common ancestor had a significant bony composition, which means that sharks have evolved in their own way and might be as highly evolved as humans are.

Janiusiscus is a remarkable find that helps scientists have a deeper understanding regarding the evolution of the primitive jawed fishes to the modern jawed ones.
Image Source: Yahoo News