You are here: Home / Tech & Science / First Photo of a Thresher Shark Birth Was Taken by Accident 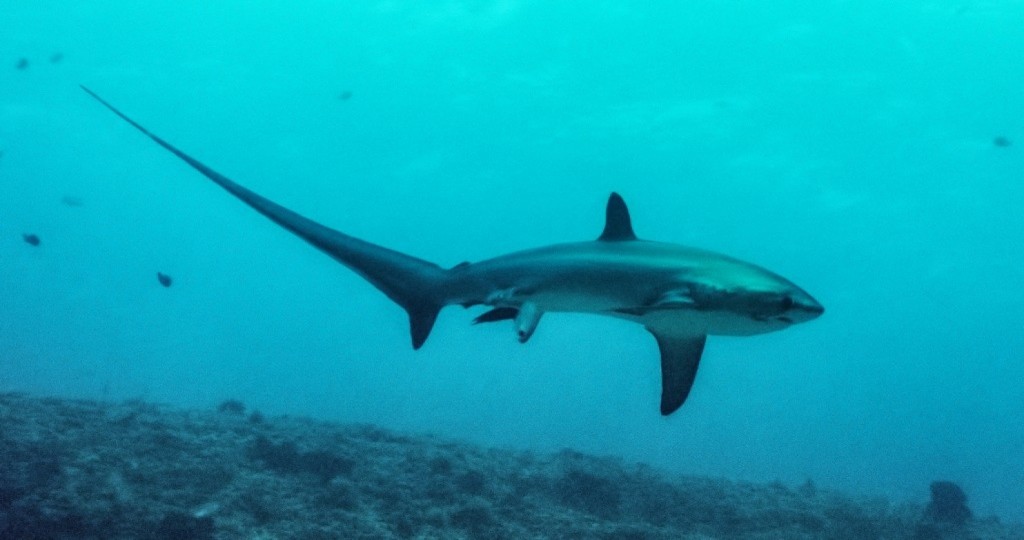 On April 4, 2013, a marine biologist unknowingly took a photo of a female thresher shark while giving birth. The photo and a review were published this week in “Coral Reef”, the official journal of the International Society for Coral Reef Studies.

The photographer, Attila Kaszo, said that back then, he even deleted the photo because it seemed faulty. He recovered it from the trash folder and sent it to Simon Oliver, who also took part in the dive, for authentication.

“He took the picture of the shark, and when he processed the image and showed it to me, I freaked out,”

Mr. Oliver also said that the picture was one of the best things in his entire carrier.

Mr. Kaszo explained what happened on the day he took the snapshot. He said he was performing some underwater research with his colleague, Simon Oliver, when suddenly they saw a very agitated female pelagic thresher shark swimming in circles nearby a cleaning station 15 meters away. Mr. Kaszo said that he couldn’t guess the cause of the shark’s distress due to the long distance. Nevertheless, he was able to see that cleaner wrasses were biting the shark on its pelvic region.

The two researchers observed the distressed fish for 4 minutes and took a picture “for identification purposes”. Soon after, the female shark left the area and never turned back.

Mr. Kaszo said that after a closer look at the photo he noticed that the head of a shark pup was visibly coming out of the thresher shark’s cloaca, an opening for genital and urinary organs. Still, the researcher couldn’t believe his own eyes.

I couldn’t reconcile it was a birth, I guess it was just too far-fetched for that,”

So, he sent the photo with the thresher shark birth to his colleague Oliver to confirm the finding. However, the photo was recovered from the trash folder because Mr. Kaszo thought it had been photobombed by a jellyfish.

That picture ended up in my trash folder because it appeared to have a ‘blob’ on it which I thought was a jellyfish,”

Mr. Kaszo explained. He also said that he had made hundreds of images on that research dive, so he could have easily overlooked that particular photo.

Mr. Oliver said that he wasn’t 100 percent sure that no one had ever taken a similar photo, but the image was a great achievement since sharks are very hard to track in the wild, and little is known of their reproductive strategies.