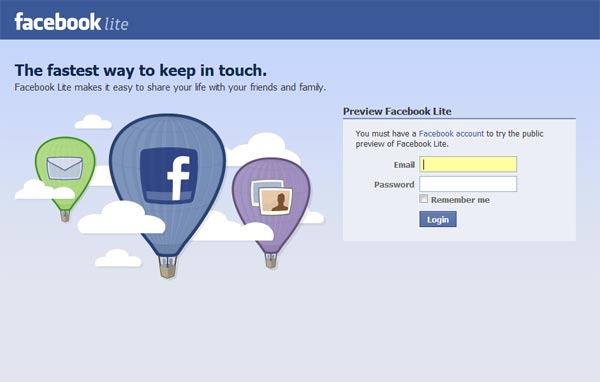 Facebook has launched Facebook Lite app, which is a stripped-down version of the giant’s mobile app. The Facebook Lite app has just the essentials to allow for Facebook browsing and it is aimed at market users with low-end mobile devices.

The design and layout are all optimized for fast loading, which means that it doesn’t look just as appealing as the standard application, but it also means that the contents load much faster and everything just moves better on it. So far, it is not clear if using the Facebook Lite app means that you get to save battery life, but it is very likely that using the lite version of the app will help preserve battery life.

The new Facebook Lite app is designed for 2G network and for areas that have limited network connectivity. Reports say that so far, the application has been downloaded over 10,000 times and the reviews are positive, as it has a rating of 4.6 stars out of 5 on the app store.

This particular move makes sense when reminded that Facebook is beginning to target the growing mobile users in developing markets. The only way to do this is to adapt, thus a downsizing of the application. Developing markets in the countries mentioned above are rapidly growing and improving, and the mobile devices that are being used are very low-cost.

At this moment the Facebook Lite app is only available for Android devices. No information as to if or when it will come to iOS, but most likely that will not happen very soon, because the app is meant to run on low-end devices, and iOS devices are very much high end.