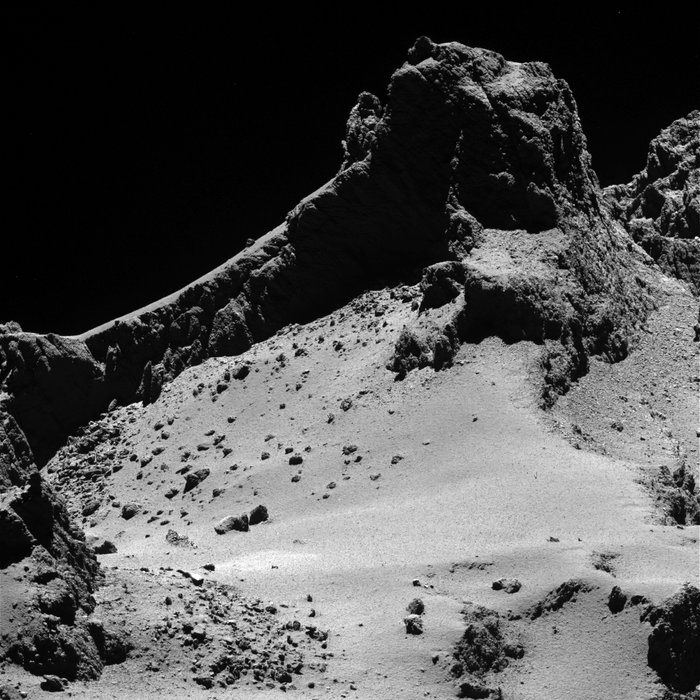 Europe’s Rosetta spacecraft and the Philae lander were built and launched by the European Space Agency. Both of them have the task of studying the comet 67P/Churyumov-Gerasimenko (67P) and on November 12, 2014 the Philae managed to achieve a first in the history of mankind: it landed on a comet.

Europe’s Rosetta Spacecraft sent back information about the surface of the comet and it’s not what the scientists expected. The surface is much more bumpy and dusty than it was expected, but there are also surfaces that are unexpectedly smooth.

The Philander rover landed on the 67P comet in November of last year, but it missed the landing location by half a mile, which made it impossible for it to get its power from the sun. The Philander lost power very soon after it landed, which cause quite a lot of drama in the astronomical society.

There are some good news, though, regarding the Philander. It appears that the comet is getting closer to the sun, while orbiting, and this means that Philander is going to have access to the sun that powers it. When this happens, the European Space Agency is going to receive precious information about the surface of the comet. 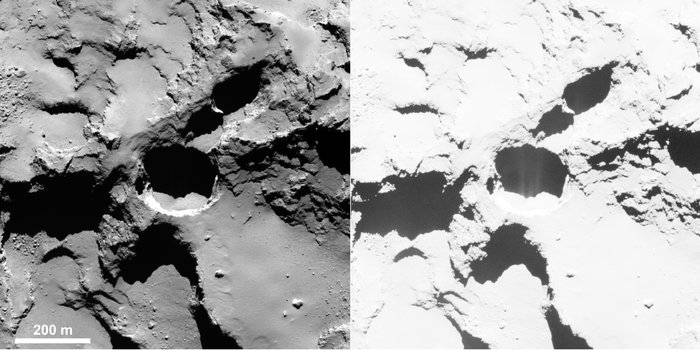 Until that happens, Europe’s Rosetta spacecraft is orbiting the comet since August of last year and it has collected some incredibly valuable data. All the data was published in the journal Science in no less than seven studies.

Up until now, no other spacecraft has ever tagged along a comet while it was approaching the sun, which is why scientists are expecting that 2015 is going to be a year when Europe’s Rosetta spacecraft is going to reveal quite a lot of amazing and unique discoveries.

Even if Rosetta has been riding next to the comet for a little while, scientists have managed to get plenty of data from the spacecraft. One of the biggest surprises, scientists say, is the fact that the surface of the comet is very lumpy.

Nicolas Thomas, from the University of Bern, Switzerland, said that:

We have smooth surfaces—we don’t know how they formed. We have brittle, crumbly material. We have material that looks like rock. I don’t think anyone had even imagined something like that.

The comet has been mapped pretty well and it appears that it has a rubber-duck shape: a large piece is about 2.5 miles long and it is attached to a smaller piece that is only 1.6 miles across. These two pieces are attached to each other by a very narrow neck, scientists say. While nobody knows why the comet got its present shape, Holger Sierks, a scientists of the Max Planck Institute for Solar System Research in Germany, believes that the odd shape of the comet is the result of two smaller objects smashing into each other millions of years ago. He also admitted that the shape could also be given by erosion. 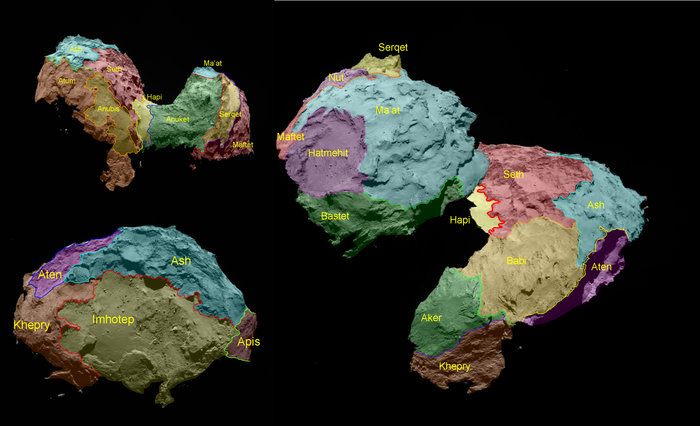 Another interesting particularity of the 67P comet is its pits of up to 650 feet (around 200 meters) across and up to 230 feet (around 60 meters) deep. Scientists believe that they were formed by ice that melted when the comet approached the sun during its plenty encounters with it. Remember that the comet has been orbiting the sun for many, many years.

Europe’s Rosetta spacecraft has also revealed that the lining of the walls of these pits present a Goosebump-like texture, about three feet across. It is believed that these Goosebumps are remnants from the original rock that the 67P comet was made from.

Another very interesting fact that was mentioned in one of the seven papers about the surface of the comet is that the comet has begun to form a type of atmosphere, called a magnetosphere. A magnetosphere is an electromagnetic shield that deflects particles streaming off the sun, or solar wind.

The scientists revealed that even without Philae’s input, the information gathered about the comet is spectacular. Everyone involved in the project is expecting now for Philae to wake up from its sleep and start exploring the surface of the comet and send back valuable information about it.