You are here: Home / Tech & Science / Dogs Were Brought to America 10,000 Years Ago, New Study Shows 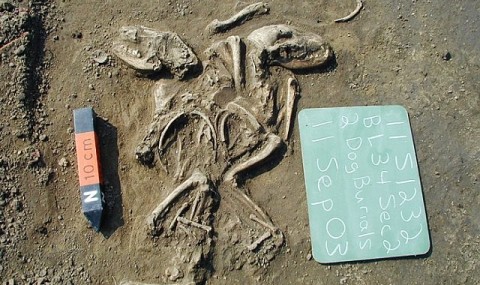 According to a new scientific study conducted at the University of Illinois, the first peoples to ever migrate into the Americas were not accompanied by dogs. The new study reveals that actually dogs were brought to America 10,000 years ago, later than previously believed.

The researchers have analyzed genetic evidence from ancient dogs discovered in South and North America, suggesting that dogs migrated to the Americas after the first humans did, thousands of years later.

Kelsey Witt, one of the researchers involved in the study, said that dogs are one of the first animals that have migrated with humans on all the continents. He said that this is the best evidence that speaks of the deep connection between humans and dogs.

The scientists analyzed the mitochondrial DNA, which is inherited from the mother and shows that dogs have come to the Americas more recently than what was believed.
Witt said that dog genetic diversity in the Americas is approximately 10,000 years old.
Previous studies showed that dogs traveled to Alaska 40,000 years ago, but scientists believe that dogs were not widespread at that time.

The researchers found that some of the dog remains they analyzed shared genetic similarities with the modern American wolf, which points to the fact that dogs and wolves interbred. The scientists also believe that early peoples who migrated to the Americas could have domesticated the dogs that descended from the American wolves.

The ancient dogs had a lot to gain by learning to tolerate human companionship, like food and safety around the human settlements. As they’ve become domesticated, the dogs followed the humans as they moved across the globe.
The researchers said that by analyzing the remains of the ancient dogs, they can find valuable data which can help them track the early human migrations.

The scientists found four new genetic signatures in the samples they studies, which suggests that the diversity of the first dogs that came to the Americas was greater than experts previously believed.

Some ancient dogs remains analyzed by the scientists showed a low level of genetic diversity, which can mean that ancient humans tried to fix certain dog characteristics by breeding them.
Image Source: moderndoggroup