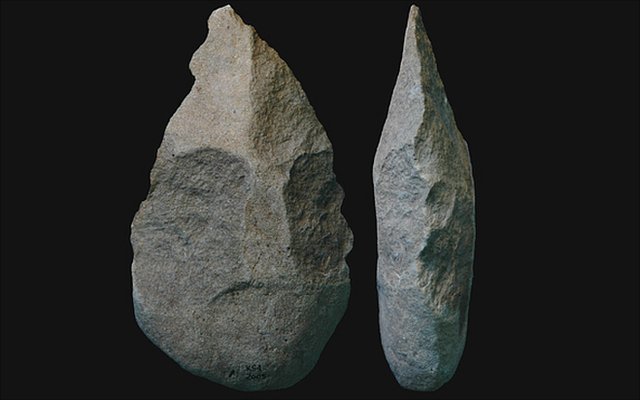 A recent study revealed that ancient stone tools used by our human ancestors more than 2 million years ago may have been responsible for sparking communication between early humans.

Our human ancestors who lived in the African savanna more than 2.5 million years ago started to craft rocks into sharp tools in order to hunt, kill and eat their prey. The early humans used stone tools to cut apart zebras, gazelles or other animals they killed for food.

This butchering technique used by the ancient humans went on for more than 700,000 years and spread all over the African continent. It also played an important role in the evolution of the human species.

A team of scientists from the University of California, Berkeley, University of St. Andrews and University of Liverpool was involved in this new study showing that ancient stone tools were responsible for human language evolution.

The researchers have discovered relevant evidence that proves the early stone tools dating back to the Stone Age are closely linked to the humans’ ability to learn and communicate. Their study also sheds new light on the importance of the early forms of culture in shaping human evolution and modern societies.

The new study reveals that our ancestors used ways of communication more complex than it was previously believed. Researchers say that early humans used to teach others different skills and they even had some sort of primitive language that started more about 1.8 million years ago.

One of the researchers involved in the study, Thomas Morgan, said that the new findings show that ancient stone tools were not just an evidence of human evolution, but were actually responsible for shaping it. Morgan added that these tools played an important role in the development of human communication and modern teaching.

Researchers tried to teach students how to make ancient Oldowan stone tools as part of their scientific experiments. These tools are created by hitting a hard rock against a different kind of rock, like flint or basalt. This stone-sculpting procedure was used in the Lower period of the Paleolithic in eastern Africa and went on for more than 700,000 years.

These experiments proved that our human ancestors had to use some kind of language and teaching skills in order to teach others to carve the stone tools.
Image Source: bbc.co.uks