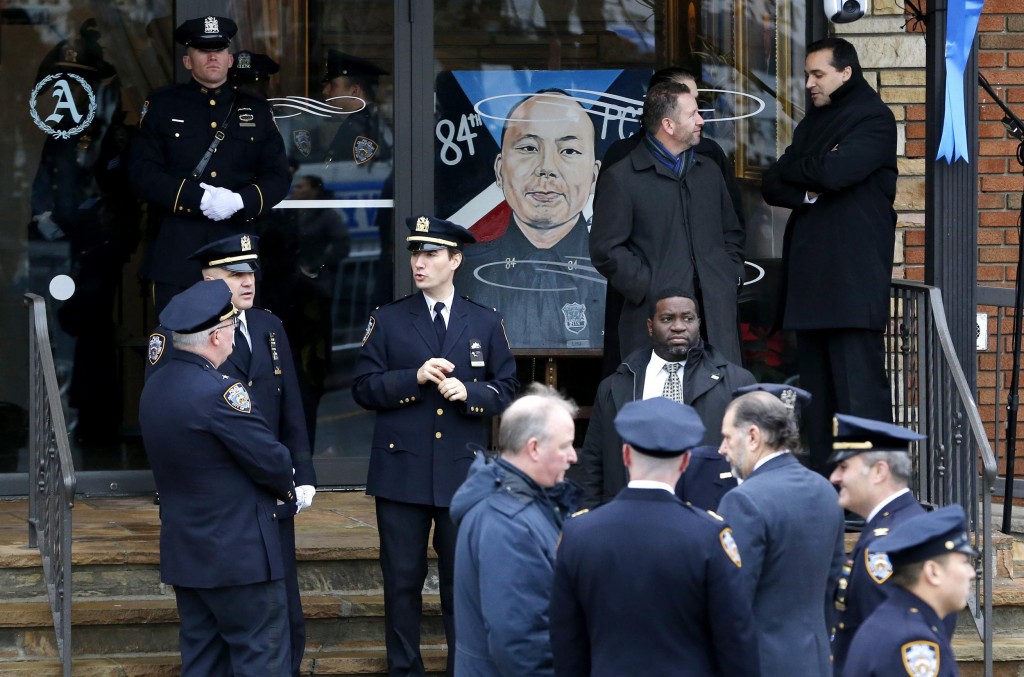 More than 10, 000 people attended the funeral of slain officer Wenjian Liu. He was buried at Cypress Hills Cemetery, the same cemetery where his colleague Rafael Ramos was laid to rest two days after Christmas.

Although last weekend,  NYPD Commissioner William Bratton requested the officers not to turn their backs during Mayor Bill de Blasio’s eulogy, some still proceeded to do so, in sign of protest, just like they did during Ramos’ funeral. Many police officers believe the mayor is responsible for “creating an environment that led to the police killings”.

The funeral took place at the Aievoli Funeral Home in the Bensonhurst section of Brooklyn. It began with a Chinese ceremony led by Buddhist monks in honor of the 32-year –old fallen officer.

During his speech, New York mayor Bill de Blasio described officer Liu as a “courageous family man”. He continued by telling the mourners how much Liu cared for his family. Born in China, he came to the United States together with his parents who played an important role in his life. During his 7 year career in the force, knowing how dangerous his job could sometimes be, he would always call his father at the end of a shift to tell him he was safe and that he was heading home.

His wife, Pei Xia Chen, whom he married just two months before the shooting, told her speech through tears. She thanked him for all the moments they spent together, describing him as her soul mate and her best friend. She later addressed the public, thanking them for coming:

“I thank you for sharing this moment with me, with us, with our family, to reflect the goodness of his soul and the wonderful man that he is.”

Officer Wenjian Liu and his colleague Rafael Ramos were killed on Dec. 20 while in their patrol car in Brooklyn. The shooter, Ismaaiyl Brinsley, explained his actions on a social media site, saying he avenged the two unarmed black men killed by white officers, by putting “wings on pigs”. He later committed suicide.

Investigations showed that the culprit was an emotionally disturbed solitary man. His violent episode started with the shooting and injuring of an ex-girlfriend in Baltimore.

After this tragic events, people from all over the country started making donations for the victims’ families. The Ramos-Liu Fund currently raised $384,349.

Major companies and institutions such as the Brooklyn Nets, Associated Supermarkets, and the New York Red Bulls have also contributed with donations.
Image Source: NBC News