You are here: Home / Tech & Science / Tropical Deforestation Could Affect Climate Changes on Both Regional and Global Scale 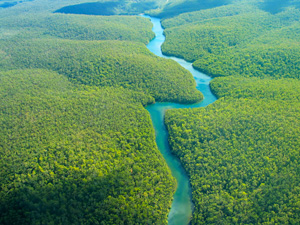 Experts believe that tropical deforestation could have a massive impact on global warming and the patterns of rainfall in tropical regions which could lead to agricultural distress and other regional climate changes.

A study revealed that cutting trees in tropical rainforests does not affect only the amount of carbon dioxide which increases in the air people breathe but also interferes with the natural patterns of rainfall and temperature increase across the planet. It is a known fact that forests have a great significance in matters of climate and the air we inhale.

The study conducted by Climate Focus and the University of Virginia has already provided information on how tropical deforestation affects the climates on both regional and local scale. Rainfall patterns have shifted in some parts of the Amazon and in Thailand, reports show that the amount of rainfall has decreased due to deforestation.

The study suggests that in regions where the deforestation took place the amount of rainfall would decrease between ten to fifteen percent. Also, a complete deforestation in the tropics could mean the increase of 0.7 degrees Celsius across the globe.

The forests around the globe are more than just carbon sinks that provide oxygen by taking in the carbon dioxide, they also connect the atmosphere to the earth by regulating interactions between them.

It is said that trees move massive amounts of water, probably more than any ecosystem on land. Forests take the water from the ground and turn it into moisture released in the atmosphere and by doing so they cool the atmosphere when the water is evaporated. By cutting down forests this process would not be possible since trees are the key factor in generating and regenerating humidity. Studies show that about 29 percent of the tropical forests in the Amazon were cut down between 2012 and 2013.

Experts created models which led them to believe that the threshold, at which the deforestation process will affect rainfall drastically, is a percentage of 30 to 50.

Other models show that clearing 40 percent of the tropical forests in the Amazon Basin would lead to a decrease of rainfall by 12 percent in the wet season and another 21 percent in the dry season. Also this act would reduce rainfall by 4 percent to the south of the Amazon in Rio de la Plata Basin where corn, wheat and soy are cultivated.