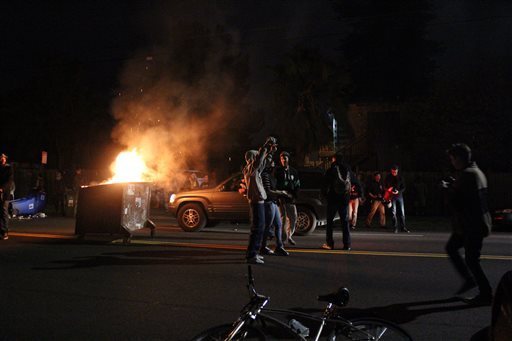 Following the Ferguson shooting in August, many Americans from all over the country have started rioting. Last night, more than 150 people were arrested in California for protesting and closing down a major freeway.
On Monday, on the other side of the country, basketball celebrity, LeBron James from the Cleveland Cavaliers joined the New York protests and wore a t-shirt on which it said “I can’t breathe”, the last words of Eric Garner, a black man who was killed by a police officer after chokeholding him.

Large crowds got out into the streets to demonstrate in several US cities following the decision of the grand jury to not bring criminal charges against the white police officer involved in the death of Eric Garner, who was unarmed at the time of the attack.

The recent death of Eric Garner and the death of Michael Brown, a black teen who was shot in Ferguson, Missouri back in August, have rekindled a national debate over racism in America.
Hundreds of people got out into the streets to protest the Ferguson shooting and went out onto the Interstate 80 in Berkeley, a town near San Francisco. The protesters stopped traffic in both directions.

The protesters started throwing rocks at the police officers and more than 150 people were arrested for resisting and obstructing a police officer. Earlier, protesters started sitting on the tracks of an Amtrak train, stopping it.
In Brooklyn, outside the Barclays Center, a group of more than 300 people protested and blocked the streets, chanting “I can’t breathe”, in the memory of Eric Garner and “Hands up, don’t shoot” in memory of Michael Brown.

In Phoenix, more than 200 people protested and marched to the police headquarters over the killing of an unarmed black man by a white officer. Authorities described the incident as being a struggle between the two. The protesters wanted the name of the police officer who shot the 34-year-old Rumain Brisbon, who was said to be a suspect in drug-related affairs.

The Attorney General of New York State, Eric Schneiderman said on Monday that he will investigate all the police killings of unarmed civilians in his state.