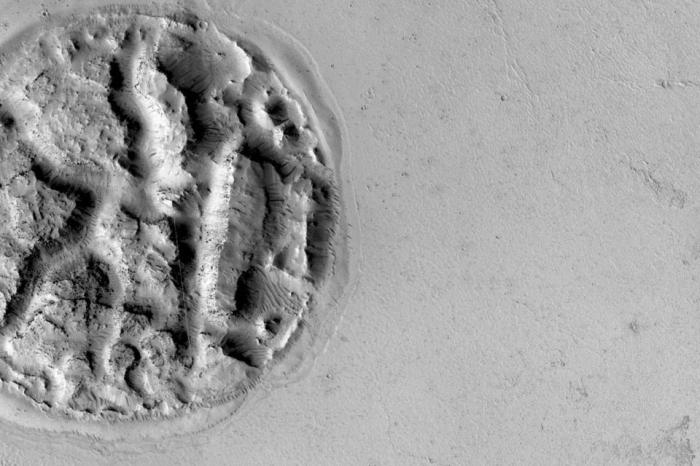 NASA has released pictures of a strange-looking formation on the Mars surface. Some say the strange Mars formation looks like a “brain”, other claim it kind of resembles a cookie. The recently found formation is circular in shape and NASA said is about 2 km wide.

Scientists said about the strange Mars formation that it looks like a brain, a cookie or even like a deformed waffle. The strange formation appeared in a photo released by NASA last week and cause some fuss on the internet. The peculiar-looking landform has raised ridges that run through its center and is more than 1.2 miles wide.

Contrary to some beliefs, that the strange Mars formation was made by a gigantic Martian baker, scientists believe the weird landform was probably the result of volcanic activity which dates back many years. The NASA researchers from the Jet Propulsion Laboratory in California don’t think the strange Mars formation is anything but a volcanic “imprint”. They said the landform was seen on the Athabasca region where some of Mars’s youngest lava flows took place.

The Martian surface was once a very violent environment but is now replete with sleeping volcanoes. Some of the Martian volcanoes are 100 times bigger than any we have on Erth. The reason for the gigantic volcanoes is that the crust on Mars, unlike the Earth’s crust, remains stationary. This means tat the lava can pile higher for a longer period of time.

Because Mars has a lower surface gravity, there have been longer lava flows than the ones on our
planet.

NASA captured the strange Mars formation on camera using the Mars Reconnaissance Orbiter. The Orbiter was launched in 2005 in order to look for any signs of water on Mars. It took seven months for the Orbiter to land on the Red Planet and since then, it has studied many “strange-looking” formations. The Orbiter is equipped with a HiRISE camera, a state-of-the-art piece of technology.

This is not the first strange Mars formation NASA encounters. Scientists have analyzed what looked like a skull, a rat or a door handle on the Martian landscape.