You are here: Home / Tech & Science / Mars Crater NASA Curiosity Rover Is Exploring Was Once a Huge Lake 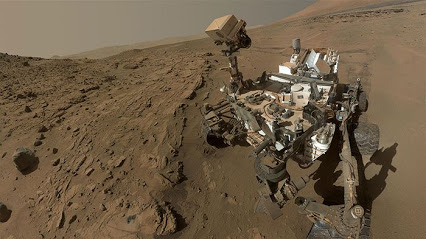 Everyone’s favorite little machine, the NASA Curiosity rover is now exploring a huge crater which the scientists believe to have been a huge lake a long time ago.

The scientists have named the huge crater Mount Sharp and is a three-mile high pile of layered debris which rises from the floor of another crater named Gale Crater. The NASA experts believe this crater was formed many billions of years ago.

The scientists believe the mountain was created by the sediments from the rim of rim and transported toward the center of the crater by alluvial fans, wind-blown drifts and deltas.

“During wet periods, water pooled in lakes where sediments settled out in the center of crater.”

“Even during dry periods in the crater center, groundwater would have existed beneath the surface. Then, during the next wet period it would resurface to form the next lake. This alternation of lakes, rivers and deserts could have represented a long-lasting habitable environment.”

After the crater was filled with sediment partially and erosion from sedimentary layers occurred, the ancient sequence of the lake was exposed. Also, NASA said that there were river and desert environments along the lower flanks of the Martian Mount Sharp.

The NASA Curiosity rover drove uphill and southward from where the landing site is and went exploring toward the middle of the crater. The little rover found evidence of lake deposits that had been exhumed by millions of years of constant erosion. The NASA scientists said that these layers are part of the Murray formations and can be found in the lower part of the Mount Sharp.

The NASA scientists said that the good thing about a lake which happens repeatedly is that it tells how the environment surrounding it works. NASA Curiosity rover will climb higher on Mount Sharp and will give the researchers the opportunity to make experiments showing them how the atmosphere and water interact with the sediments. The scientists say that they can also establish how the chemistry in the Martian lakes changed over the course of many years.