You are here: Home / Health / Kids’ Toys are Causing More Injuries Than Ever 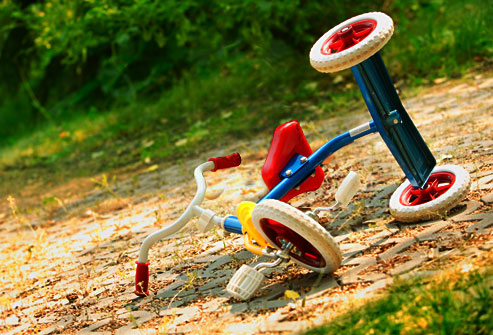 A recent study found ride-on-toys such as scooters, wagons, tricycles and motor-powered kiddie vehicles like Barbie Jeeps  to be responsible for a growing number of children’s injuries and emergency room visits.

A child is reportedly treated in an emergency department across the country for a toy-related injury every 3 minutes, the study released today by Nationwide Children’s Hospital in Columbus has found. Children’s scooters, in particular, have driven much of the 40 percent increase in the rate of injuries associated with toys from 1990 to 2011.

said Dr. Gary Smith, lead author and director of the Center for Injury Research and Policy at Nationwide Children’s Hospital in Columbus, Ohio.

In this first-of-its-kind study, the researchers found that an estimated 3,278,073 children were treated in United States emergency departments from 1990 through 2011 for a toy-related injury. In 2011, a child was treated every three minutes for such an injury. Slightly more than half of the injuries happened among children younger than five years of age.

Foot-powered scooters drove most of that injury-rate spike, the study found. Scooter mishaps typically involved kids between the ages of 5 and 17, who most commonly sustained lacerations from falls. When scooters regained popularity in the late 1990s, Smith said, he and other paediatric doctors saw “a rapid increase” in related injuries, adding:

“I will say I’ve never seen anything like it in my career.”

In the meantime, young children remain more at risk for choking on small toys and tiny toy parts, the study also found. Injuries with ride-on toys were three times more likely to involve a broken bone or a dislocation than other toys.

“This isn’t about guilt, blame and fault. We’re not pointing fingers,” said Smith. “A child’s occupation is play and toys are their tools. These toys can be used safely but parents need to be aware of the precautions that should be taken for certain toys to help prevent an injury.”