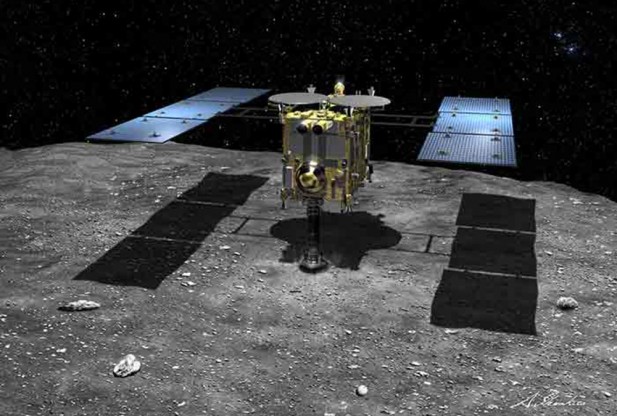 The Japanese Space Probe Hayabusa 2 has finally parted from the Tanegashima Space Center on the 2nd of December, after two attempts got postponed due to poor weather conditions. As we speak, it is on course towards the asteroid known as 1999 JU3 with the mission to collect as much information as it can about potential organic material present on it.

When it comes to unraveling the universe’s mysteries, and more specifically our solar system’s history, studying asteroid composition led scientists to the most groundbreaking epiphanies of the century. Asteroids are probably one of the most important gold mines of information humankind can hope to delve in because they are essentially the building blocks of the planets. The materials on these travelling giants may hold answers to the diversity of the planets in our system and even explain where life originated from. There are multiple theories that question how the first life forms made their way into existence on our planet and do not rule out the possibility of life having been transported to Earth on an asteroid.

The reason asteroid 1999 JU3 drew the scientists’ attention is its carbon-based composition and being one of the very few examples of easier to reach candidates in our solar system. Besides the Japanese mission, it has also been targeted as a focal point of interest by NASA’s OSIRIS-Rex and ESA’s Marco-Polo mission respectively.

Hayabusa 2 is the second of its kind, a new and improved version of its predecessor and this time, its mission is greater and more ambitious. The original craft was sent out with the same goal in mind, but due to a series of crippling malfunctions, fuel leaks and numerous other challenges it only managed to return to Earth with microscopic specimens. The Japanese space probe Hayabusa 2 is valued at nearly $300 million and packs 4 reaction wheels, a much improved sampling system and software and 4 landers to get the job done.

The space probe is not expected to reach its target destination until summer of 2018. It will initially stop about 12 miles away from the asteroid to capture and elaborate a general survey of it. Post-landing, the 4 rovers will begin retrieving samples and studying the composition of the asteroid from 3 different sites of the asteroid. The whole mission is expected to take nearly a year and a half and the probe will be returning to Earth in December 2020, landing in Australia assisted by parachutes after a blazing re-entry in the atmosphere.