You are here: Home / National News / Frank and Louie, the 15-Year Old Two-Faced Cat, Passes Away 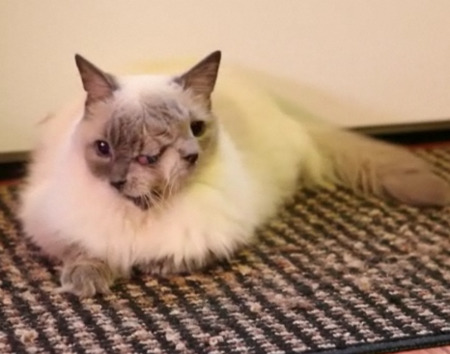 A 15-year old two-faced cat died at the age of 15 in Worcester, England. A Guinness World Record holder, “Frankie and Louie” was a two-faced cat that gained worldwide fame due to its unique look. The cat was rejected by it’s mother back in 1999 and was  brought to a veterinarian as a consequence in order to be euthanised under the assumption that animals dealing with such a condition don’t often live long.

Frank and Louie was born with a rare congenital disorder referred to as diprosopus. These cats are known as Janus cats. Born with two functioning eyes, one blind center eye, two noses, two mouths and one brain, Frank and Louie was not expected to survive long, as no creature with this condition is actually expected to.

But Martha Stevens, its rightful owner, was determined to help the kitten live in the first place. She tube-fed the cat for the first three months, and eventually the two-faced cat learned succeeded in eating and drinking on its own and began to grow.

In spite of the fact that Frank and Louie maintained a shocking appearance, the cat was friendly, and at age 12, Guinness declared it the world’s oldest living Janus cat. The pair shared a brain, but Frank did all the purring and eating since Louie didn’t have a bottom jaw and esophagus.

The cat’s owner, Martha Stevens, said veterinarians believe the cause of death was cancer.

“All in all, he was a healthy cat, his biggest ordeals having been neutering and the removal of some teeth from Louie’s mouth, which had no bottom jaw,”

Janus cats occur when one embryo either splits to form twins, or two embryos early in development don’t quite properly fuse together,  Leslie Lyons of the University of Missouri’s Department of Veterinary Medicine and Surgery, who specializes in feline genetics explained. Though it may have two faces, a Janus cat almost certainly shares one brain, Lyons added.

“In this particular case, one [side] didn’t have a lower jaw or esophagus. If you had both sides of the face eating, I don’t know what kind of complications that would cause. Initially the complications are going to be with the ability to eat and breathe properly.”

Two-faced animals aren’t limited to cats, either, she added.