You are here: Home / Tech & Science / Dragonflies Use Predictive Hunting Technique to Grab Their Prey (+Video) 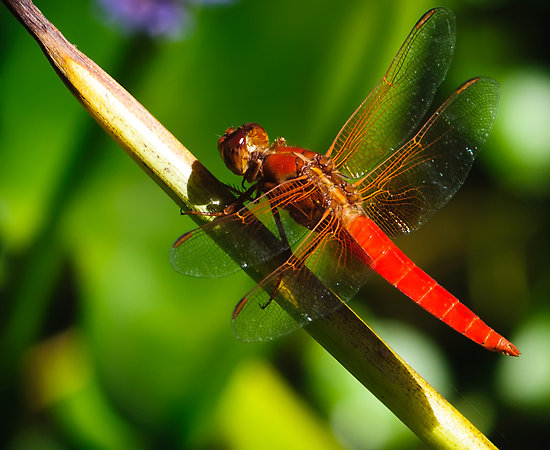 A study focused on the hunting technique of dragonflies was led by experts from the Hughes Medical Institute in Virginia.

Scientists designed a artificial bait that was used to attract the dragonfly and captured the events with a ultra-high-speed camera. The bait was made from beads that was controlled by remote by a computer and the study was conducted in an environment that simulated the dragonfly’s natural habitat with artificial vegetation.

After they caught everything on camera and analyzed all the information available, experts were intrigued to find that dragonflies do not use a reactive hunting technique as they previously thought, but a predictive technique.

Predictive hunting techniques are known to be used by a wide variety of fish, mammals and birds but experts have never seen this technique to be used by insects.

Experts have found that dragonflies are actually very elusive insects when it comes to hunting their prey. Once the dragonfly had visual contact of the prey it concealed its body movement and orientation but it didn’t lose sight of the prey.

One of the researchers that studied the dragonfly said that it is a very devious hunter because when dragonflies are hunting they get their target in sight and then they align their bodies in the direction of the prey. This allows the dragonfly to attack the target from behind and under it, the blind spots of the prey. According to experts, the dragonfly does not change its flight direction as long as they have sight of their prey even if the target does.

Also experts found that dragonflies take their time, while hunting, to copy and mimic the movements of their target. After that, the dragonflies create a path that they will use to intercept the target.

To ensure that they will seize every moment of this study, the team of scientists attached very small reflectors to the backs and heads of the insects, thus allowing the cameras to record every move the dragonflies made while hunting. Experts say that in the studies to follow the will analyze the neurons of these insects and how it behaves while hunting.