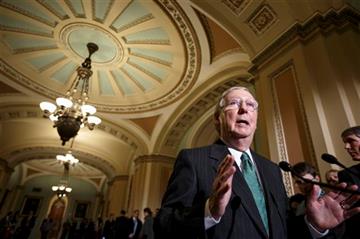 Another Congress ends leaving everyone mostly puzzled and unsatisfied. Politics in democracy cannot please everybody, obviously, but this time the 113th Congress closed in a rather confusingly blended manner. In short, the Senate approved some of Obama’s administration nominees along with a ‘trade off’ bill on tax extension but was not able to reinstate a federal terrorism protection program, about to expire soon.

The 113 Congress officially ended Tuesday night, marking the finale of a rather fruitless and generally split-up audience. With the closing of this session Harry Reid’s term as Senate majority leader also touches the finish line. Nevertheless, the official gave President Obama a goodbye blessing as the chamber accepted 69 executive branch nominees in a speedy manner- from last Friday to this Tuesday.

Furthermore the Senate managed to keep the legislature running by voting an omnibus bill this weekend. Obama signed it last night.

The representatives were also very successful in quietly passing a bill that is going to expand more 50 tax cuts ‘worn off’ since last December. The bill got through but not without a battle between President Obama and Reid over a more driven arrangement.

Reid had discussed an agreement with Republicans in November to augment the tax credits for no less than two years with a few tax reductions demanded by the business environment who got the long-term extensions.  A more positive feature of the enactment is that it settled that Earned Income Tax Credit and the Child Tax Credit will expire in 2017 as it was previously agreed, following White House pressures.

After a presidential veto and a lot of fuss in the Congress over the bill, the final version was considered better suited for allowing Americans to clearly calculate their taxes as in the beginning of the year, the tax –filing season begins.

Reid was aiming for another type of deal but he had to make do. Ron Wyden, Senate Finance Committee Chairman has seriously criticized the bill for not giving enough time in advance to low -income families to know what their future taxes will be. With Republicans assuming control over the chamber in January, Wyden and different Democrats stress over what will happen to those tax reductions in 2015.

Nevertheless, legislators seemed to be more in a holiday mood than in a mood for further debating the bill and passed it on Tuesday. Even if  both Republicans and Democrats had their issues with the negotiated bill, Reid managed to use it as a bate for keeping members of the Senate on duty as he has pushed the president’s nominees for confirmation.

The Senate was eventually convinced to approve the nominees but it was not persuaded to pass a controversial bill regarding terrorism.  The terrorism risk insurance program also known as TRIA benefited from Democrats support but the Republican Sen. Tom Coburn declined to lift his hang on the bill.  Coburn and other financially preoccupied Republicans questioned the program. According to them if the bill was to pass, the free market might have ventured into insuring people and businesses from future terrorist assaults without the government fence program. The TRIA project will now terminate at the end of 2014.