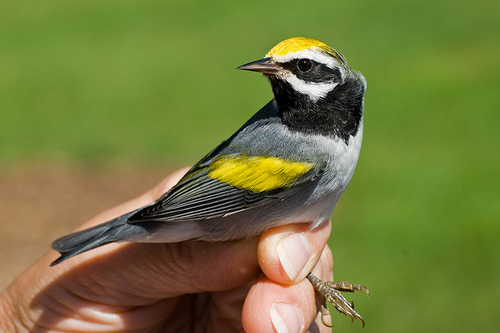 A team of scientists began to study the golden-winged warblers bird species earlier this year and while they were conducting their research the scientists discovered that the birds changed course to Florida.

The behavior of the birds was a mystery to the scientific team so they started to dig deeper into this matter. They discovered that the birds changed their course a few days before a massive thunderstorm arrived in the Great Plains.

A study revealed that the golden-winged warblers sensed the incoming thunderstorm and avoided it. Researchers were impressed by this fact because this behavior was never reported before in birds.

A theory about the mysterious behavior of the birds is that they could hear the infrasound created by storms, which is a low-frequency noise. Experts found out that birds hear these low-frequency sounds even if humans can’t and the birds chose to avoid the storm regardless of the long flight and high amount of energy they had to put in it.

Gunnar Kramer, co-author of the study and ecologist at the University of Minnesota, said that him and his colleagues were very impressed by the behavior of the birds and realized that there is more to birds than they previously thought.

The team of researchers discovered the storm by accident while they were studying the migration route of the golden-winged warbles, according to Kramer.

This species of birds are known to fly to Central and South America during winters and they fly to the Great Lakes and the Appalachians regions to breed and grow their young.

According to the study, scientists went to the Great Lakes and placed small locators on some of the warblers to record their location and offer information about their behavior and migration paths. The study was published in the Current Biology journal on December 18.

In April 2014, the team traveled to Cumberland Mountains in Tennessee where the birds, according to the geolocators placed on some of them, were known to have been. But upon arrival the researchers didn’t find any birds, the warblers left the mountains.

A few days later, the birds returned to Tennessee. The flock travelled more than 1.500 kilometers ( 900 miles ). Scientists then looked at a weather report which revealed the fact that the birds left Tennessee around the time when 84 tornadoes were reported in the Midwest which killed 35 people.

Jonathan Hagstrum studies migration paths of birds at the United States Geological Survey said that the data discovered by Kramer and his team revealed another manner in which birds use their ability to hear low frequency sounds. Hagstrum stated that birds were known to use this ability to navigate while migrating.