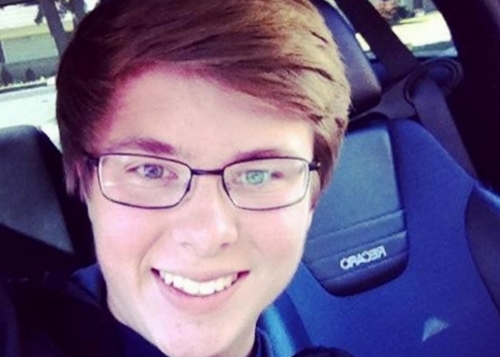 A 19-year-old Michigan college student, Chandler Swink, who was in a coma for a week with a severe allergic reaction to peanut butter died a day before Thanksgiving. Chandler Swink had been in St. Joseph Mercy Oakland Hospital since Nov. 18 and died there Wednesday after being taken off life support, university officials said.

Swink brought himself to St. Joseph Mercy Oakland Hospital on Nov. 18 after eating peanut butter cookies at a friend’s house. He immediately injected himself with an EpiPen, but before he even got to the emergency room, he lost consciousness in the parking lot and went into a coma.

He reportedly suffered from an anaphylactic shock, asthma attack, and cardiac arrest. He was pronounced dead at 8:45 p.m. on Wednesday. The family decided to remove his life support after doctors told them that his chance of survival was only 2%.

Chandler was diagnosed with a level six severe nut allergy since age 2.

“It’s been tough on all of us the past few days,”

“It’s brought our family closer but we miss him so much.”

Mom Nancy says Swink had been bullied throughout his childhood for his allergy, which was so severe his school district went peanut-free for him, much to the displeasure of many.

“When he went to college, he was the happiest kid because he was no longer labeled,”

“Every person who has come to visit him has said that Chandler is the most caring, generous, funny, easy going man they’ve ever met. That’s how he’s lived his last two years.”

Peanut allergy among the most common causes of food-related death, according to the Asthma and Allergy Foundation of America. Those with peanut allergy are at risk of a hypersensitivity reaction to dietary substances in peanuts that can trigger an overreaction of the body’s immune system.

An online GoFundMe fund-raiser raised nearly $30,000 by Thursday night in order to help the family with expenses associated with the tragedy.

The funeral will be held on Monday, Dec. 1, with a viewing at 10:00 a.m. and mass at 11:00 a.m. at St. Thomas More, located at 4580 N. Adams Road, Troy, MI 48098. If you would like to share your memories of Chandler, please contact Editor-in-Chief Oona Goodin-Smith at editor@oaklandpostonline.com.