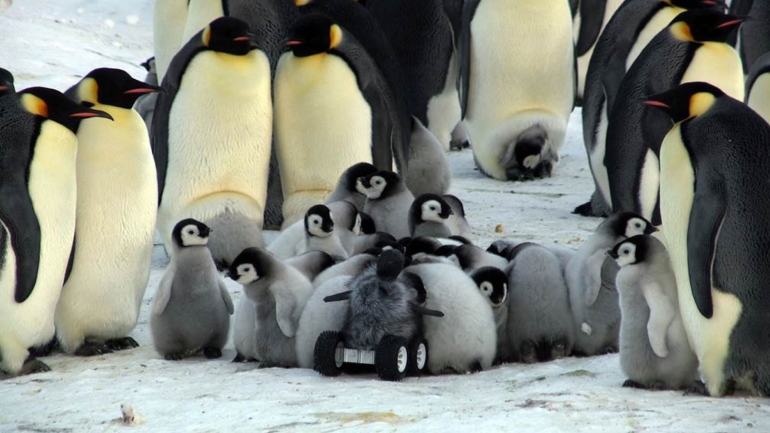 Emperor penguins are highly sensitive animals. When scientists attempt to personally assess the penguins’ health status, anxiety sets in, disturbing the heart rate and other important indicators. Yvon Le Maho of the University of Strasbourg in France conducted a team which came up with a method to avoid getting too close to the shy animals in Adelie Land, Antarctica.

The team constructed a rover to record data from microchips implanted under the skin of king penguins. The approach turned out to be a highly effective way of relaxing the animals. When the rover was around a king penguin, its heart beat rate was around 24, but when humans approached a penguin, the number went up to 35 on average.

“Approaching animals with a rover can reduce impact, as measured by heart rates and behaviour of king penguins, thus allowing such animals to be considered as undisturbed,” according to the authors.

The next step was to adapt the rover to interact with emperor penguins. The solution was to send a fake chick. Yes, the vicious researchers played with the penguins’ parental instincts, but it proved to be the right move. The rover managed to sneak in the group and record the data successfully. The chicks welcomed it, while the parents attempted to communicate with it.

“Chicks and adults were even heard vocalizing at the camouflaged rover, and it was able to infiltrate a crèche without disturbance,” note Yvon Le Maho and colleagues, who watched the scene from more than 600 feet away.

Designing a successful fake penguin chick is not an easy task. The first versions scared the penguins, but the team did not give up. The fifth one convinced the penguins that the rover is one of their own. In fact, researchers described that penguins saw the fake chick as a potential mate for their offspring, so they were disappointed by the lack of reaction. The rover hasn’t been designed to produce sounds, but there’s plenty of time to come up with an advanced version.

The solution resolves plenty of methodological issues. Data accuracy can easily be affected by human intrusion. With the problem virtually out of the way, other core scientific issues can be properly tackled. Moreover, the method could be used to research other animal species.

“The relevance of this technology extends beyond terrestrial populations of seabirds or mammals, as rovers could be adapted for use in aquatic or aerial environments,” the authors add.