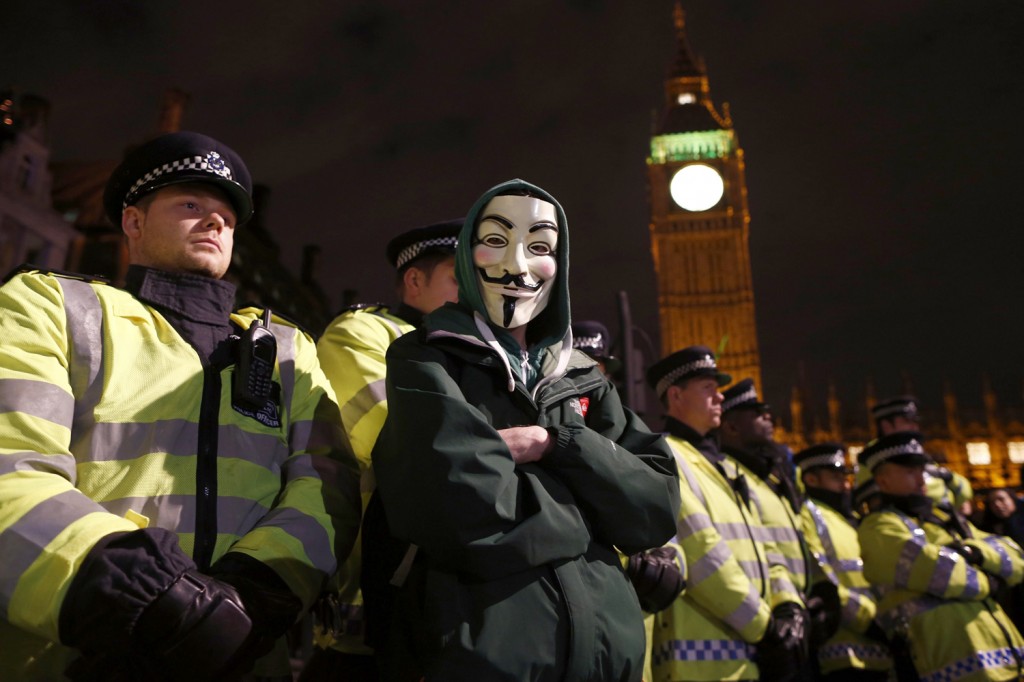 Thousands of anti-capitalist protesters marched on London’s streets on November 5 against political oppression. Supporters of pro-Palestine movements, as well anti-war demonstrators, marched along in a protest organized by hacktivist group Anonymous. Guy Fawks masks flooded Trafalgar Square on their way to Parliament Square in what was called the Million Mask March. Anonymous was related with the Occupy movement, Wikileaks, as well as with the Arab Spring.

Numerous officers in riot gear supervised the march. The police temporarily imposed a law article which allows them to remove masks at will if they suspect a potential crime. Ten people have been arrested during the protest, three of whom on suspicion of assaulting police officers, while the rest on firework offences and public order crimes.

Chief Superintendent Pippa Mills, the police spokesman for the event, said: “Police officers worked under challenging conditions. Despite numerous attempts, the organisers refused to engage with us ahead of the evening’s events.” Well of course they didn’t, because doing so would be highly inconsistent with anti-establishment principles.

Russell Brand arrived at the march without his mask and advised protestors to “not get arrested”. However, while some protesters cheered his presence, others were less excited about it. One protester even asked: “Why’s he here? Shouldn’t he be doing interviews with the BBC or something?”

Protests under the Million Mask March umbrella took place in more than 400 cities, according to its webpage. Although the London protest was probably the largest, Anonymous gathered in Washington D.C., Helsinki, Johannesburg and Hong Kong.

Anonymous organized the first march in 2012. The police arrested 15 people during the 2013 protests. A website coalescing protesters announced that a far larger number of people are expected to take to streets in 2015, when November 5 falls on a Saturday.

The movement took Guy Fawkes as its inspiration. Fawkes was a member of the failed Gunpowder Plot, which took place in 1605, November 5. The day is celebrated with bonfires and fireworks all over the UK.