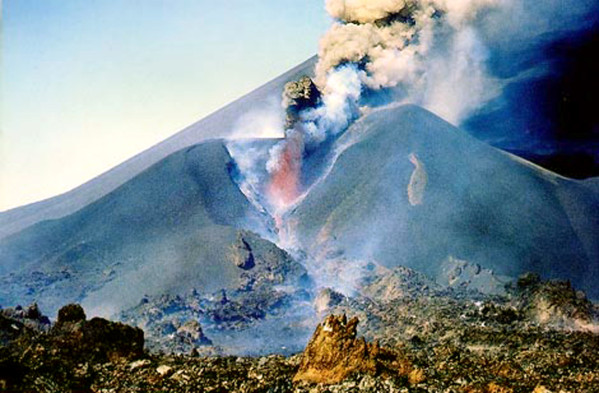 Pico do Fogo Volcano first erupted Saturday evening. The volcano is situated in the Cape Verde archipelago, in the Republic of Guinea-Bissau, on the West African coast. The prime minister ordered the evacuation of one of the villages.

It is not an usual thing for this volcano to erupt and this blast is considered to be the biggest one in decades. The eruption not only caused the evacuation of the residents but also the local airport’s closure. The first eruption took place Saturday evening around 8 PM and a further one was set on Sunday morning, causing the evacuation of the residents of the village situated at the bottom of the volcano, Cha das Caldeiras. However, no casualties or damage were immediately reported after the eruption.

Several terrified people left the affected village without waiting for further instructions from the authorities. The government is also planning on sending a plane to provide assistance for the residents.

No immediate details were available after the blast on Sunday. Last time the volcano erupted was back in 1995, on the 2nd of April. According to volcanologist Bruno Faria, the blast on Saturday evening was greater than the one in 1995, which spread a cloud of ash across the southern tip of the archipelago. The news about the eruption was announced by Radio Cape Verde, a radio post owned by the state.

“The eruption was very fast. But we are appealing to the people for calm,” adding that the state is “implementing its emergency civil protection plan.”

In 1995 the volcano erupted for the first time since 1951 when 5,000 people were evacuated with the help of the United States and several European countries. The time between eruptions has now shortened.  The eruption recorded this weekend was a level three on the nine-level volcanic explosively index.

Cape Verde archipelago, a former Portuguese colony lies about 300 miles (500 km) off Senegal’s coast. The archipelago consists of ten islands, eight of which are both inhabited and volcanic.

The volcano’s peak is surrounded by vineyard an offers a fantastic view, which makes it a popular destinations for hikers and tourists.