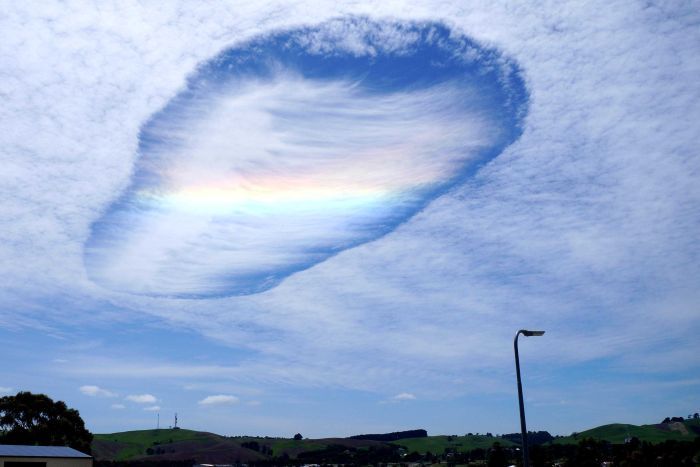 A rather bizarre cloud ringed by a rainbow appeared over Victoria’s sky on Monday, making witnesses speculate as to what it could be.

Such a formation is called a Fallstreak Hole and occurs whenever an aircraft flies through clouds causing particles to freeze in the air. The most recent one formed over the Wonthaggi, in Victoria and looked like a hole in the sky.

Witnesses flocked to Twitter attempting to announce the curious formation. Some users even claimed that it was a “Rapture” cloud.

However, such phenomena are completely benign and stem from “seeding”, when airplanes break through clouds and cause water to freeze up into ice particles as it flows around the aircraft.

“We just looked up and there was this thing that looked like something out of Independence Day,”

Ben Stewart, one of the witnesses spotting the cloud formation said.

Stewart wasn’t the only one staring at the formation trying to figure out what it was. He joked that those gathered were talking amongst themselves about the “mothership arriving”.

Michael Efron, duty forecaster at the Bureau of Meteorology said that the formation could have very well been a punch hole cloud.

Punch hole clouds form, Mr. Efron explained, when the water contained in the cloud is below freezing temperature but has not frozen because of the lack of ice nucleation particles.

The ring observed around the formation is called iridescence and is common in many natural objects such as sea shells, butterfly wings or soap bubbles.

“This type of [cloud] iridescence occurs with high level cloud and with diffraction, [meaning] that water droplets are gathering light,”

This isn’t the only such formation sighted recently: other fallstreak clouds have been photographed over Perth in October. The entire ruckus, Efron said, is because of the fact that such formations aren’t as often as rainbows, for instance.